It always seems to happen that I find a really great book series right before the series publishes it’s final book. I may be a little late to the party so to speak but the tween children’s book series, The Zombie Chasers, is one not to be missed. This series is for ages 8-12 and is all about what the titles suggests…zombie chasing. It all started in the first book with brain-gobbling zombies invading a sleep?over at Zack Clarke’s house and in this final book they hope to find an antidote to stop the outbreak. Below is some information on the final book, The Zombie Chasers #7: World Zombination and the 2nd to last book The Zombie Chasers #6: Zombies of the Caribbean. 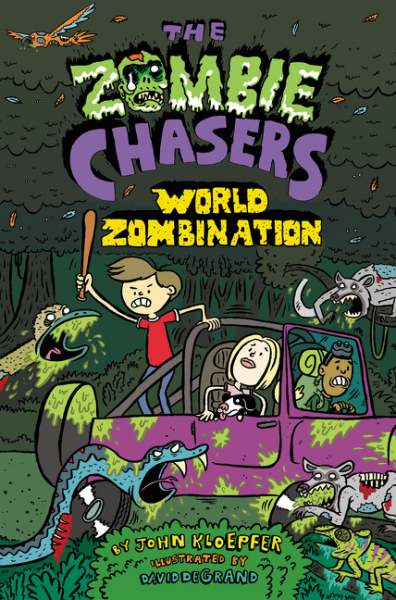 Zack Clarke and his zombie-chasing friends?Rice, Madison, Zoe, Ozzie, and Olivia?are headed into uncharted territory on their slimiest adventure yet. They’ll have to escape zombified lemurs (not cute!) in Madagascar, eat brains (yuck!) in China, and fight zombie mummies (zummies!) in Egypt.

The globe-trotting Zombie Chasers are determined to put an end to their brain-biting enemies once and for all. Will Zack and his friends get their hands on the ultimate antidote and unzombify everyone? Or will the zombies finally achieve world domination?

With the whole world zombifying around them, Zack, Rice, Zoe, Madison, Ozzie, and Olivia flee the infested coast of Florida in search of help. There’s only one person who can save them: an oddball explorer who knows the key to the antidote . . . but he has escaped to a zombie-proof bunker somewhere in the Caribbean. As they take to the high seas in search of the secret antidote ingredient, they must battle the scariest seafarers of all: super zombie pirates and undead killer sharks.

Will the Zombie Chasers survive the undead seas, or are they destined to become shark bait?

I highly suggest reading series books in publication order but I had no problem following along starting with volume #6. The books are full of action and adventure, fast-paced (no dull parts here), full of child-appropriate gore and overall very funny. This book series would be especially fabulous for reluctant readers. Since I was unable to read these to my 7 year old due to lack of time I will be reading the series to her from the beginning. Zombies are very popular right now so getting kids to read this series should be no problem at all.