Check out all the information on the HUGE DC Kids FanDome Event that takes place on September 12th as DC just revealed a new trailer and new details for the kid-friendly experience including a preview of the schedule! DC Kids FanDome is a 24-hour, virtual superhero event that celebrates all things DC â€“ TV, film, comics, games and more. Families can enjoy the event together, or parents can have peace of mind allowing their kids to explore the safe, kid-friendly experience on their own at dckidsfandome.com. The entire experience will be accessible across all mobile platforms (in addition to desktop). 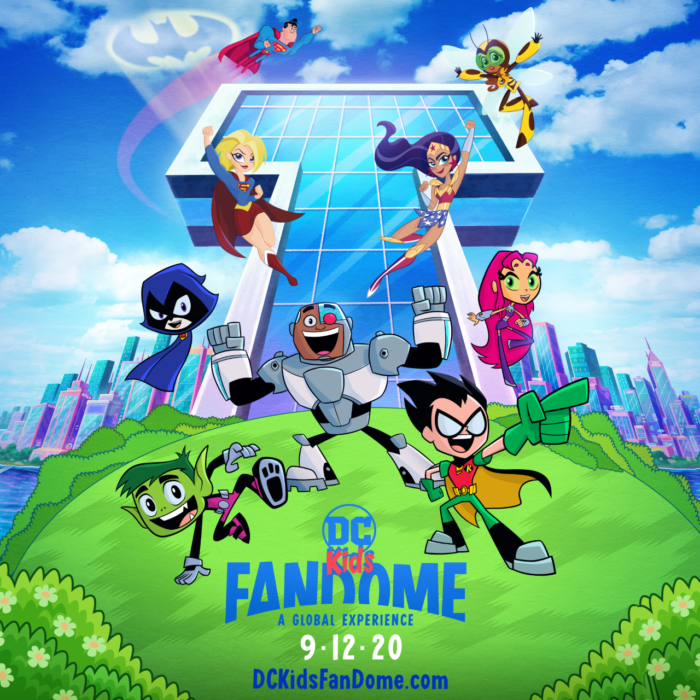 At DC Kids FanDome, kids of all ages will be entertained for hours on end, learning how to draw their favorite characters, watching clips and exclusive panels from favorite animated shows like Teen Titans Go! and DC Super Hero Girls, reading comics and so much more. Similar to DC FanDome: Explore the Multiverse, DC Kids FanDome is a first-of-its-kind, virtual experience that will celebrate all things DC â€“ films, games, TV, comics and more. Itâ€™s also completely FREE â€” with no lines or badges required. The festivities kick off at 10: 00 a.m. PDT and DC Kids FanDome can be accessed separately at the kid-friendly DCKidsFanDome.com web address. The entire experience will be accessible across all mobile platforms, in addition to desktop.

Below is a sample of the on-demand schedule detailing all the ways kids and families can have fun at DC Kids FanDome. Take a look and remember, if your kid loves Batman, Superman, Wonder Woman and other DC Super Heroes (and Super-Villains!), they wonâ€™t want to miss it!

Teen Titans Go! Cast Table Read and Panel – Join the cast of Teen Titans Go! as they talk about what itâ€™s like making the show and act out some of your favorite scenes!

Ask the Titans – Whatâ€™s Beast Boyâ€™s favorite animal? Who do the Titans think is their greatest enemy? Why does Silkie bark all the time? You got questions and the Titans got answers!

Beyond Batman – Letâ€™s just say this Batman is wayyy Beyond.  Okâ€¦see, retired Bruce Wayne calls up Terry, you know, Batman Beyondâ€¦and, well, the two of them watch a crazy clip from the old live action TV show, Batman.  Weirdness ensuesâ€¦you just gotta watch it to understandâ€¦POW!

Brick Builders – Beast Boy – Watch Brick Artist, Nathan Sawaya as he builds Beast Boyâ€™s head and then transforms it into 3 different animalsâ€¦all out of LEGOs.

Batman 101 â€“ Batsuit – Join DC Kids Show‘s very own Jett for a crash course on everything you ever wanted to know about Batmanâ€™s many amazing Batsuits!

Batman 101 – Dynamic Duo – Batman and Robin are one of the most famous duos ever! Find out what makes their crime-fighting partnership so awesome!

Batman 101 â€“ Joker – No superhero is complete without a super villain and for Batman that would be The Joker. Think you know all about this master criminal? Think again!

Batman 101 â€“ Robin – Letâ€™s shine a light on Robin, Batmanâ€™s right-hand man and discover everything there is to know about the Boy Wonder!

Batman 101 â€“ Vehicles – From the Batmobile to the Batwing, Batcycle to the Batglider, Batman has some of the coolest, most rad vehicles a superhero could ever wish for. Hereâ€™s a look at these amazing machines in action.

DC Karaoke – DC Super Hero Girls “Eyes on the Prize” – Are you ready to rise?  Of course, you are!  Is your Eye on the Prize?  Of course, it is!  Sing along with the DC Superhero girls in this heart and fist pumping music vid.

DC Karaoke – Teen Titans Go! “Go! Rap” – Do you know who the Titans are?  You will after singing along with this jam!

DC Karaoke – Teen Titans Go! “Straight Buggin” – Straight Buggin is what youâ€™ll be doinâ€™ when this track gets stuck in yo head.

How to Make Comic Books – We all love comic books, but do you know how they are made? Nandi and Jett from DC Kids Show find out all there is to know!

How to Draw with Jim Lee and Family – Ever wonder how to draw Wonder Woman?  Join Jim Lee and his family for your chance to hone your drawing skills!

How to Draw Babs Gordon – Join artist Kat Hudson, character designer on DC Super Hero Girls, as she teaches how to draw Batgirl, aka Babs Gordon.

How to Draw Batman – DC Artist Dustin Nguyen not only teaches you how to draw a moody Batmanâ€¦but youâ€™ll also learn how to draw Damien Wayne (AKA Robin)!

How to Draw Bumblebee – Sheâ€™s backâ€¦Kat Hudson, character designer on DC Super Hero Girls, gives you an in depth look at how to draw Bumblebee.

How to Draw Raven – This time animator Hayk Manukyan teaches us how to draw Raven.  Raven couldnâ€™t be more thrilledâ€¦

How to Draw Robin – Animator Hayk Manukyan shows you how to draw Robin. Titans Goâ€¦and draw!

How to Draw Superman – Fantastic teacher and DC Artist, Franco, walks you through the steps it takes to draw the Man of Steel himself, Superman.

DC Origami – Shazam! Symbol – Raven is here to show you how to make your very own Origami Shazam symbol!  Azarath Metrion Shazam!!!

DC Origami – The Flash Symbol – Join Batgirl as she shows you how to make an Origami symbol of Barry Allen, er, The Flash.

DC Super Hero Girls – Babs’ Vlog – Watch out Internet! In this all-new video short, Babs (aka Batgirl) is ramping up to become the latest social media sensation â€” with a little help from Bumblebee!

DC Super Hero Girls â€“ Lairs – In this all-new video short, Jessica Cruz (aka Green Lantern) has a new video column for the school newspaper, the Daily Planetoid, spotlighting some of the biggest (and super-est) personalities at Metropolis High School. First up on her list? Supergirl!

Make Your Own Comic Book – Check out these tricks of the trade for making your own comic book from pro comic book writer and illustrator, Kirk Scroggs!

Teen Titans Go! Fitness – Dem Legs – Do you have what it takes to join the League of Legs?  You will after this workout! Kick and Lunge.  Repeat.

Teen Titans Go! Fitness â€“ Vegetables – If you wanna be lean, you gotta eat your greens!