I received the All Around Bustletown series  for this feature. Opinions expressed are my own.

Prestel’s new All Around Bustletown series by Rotraut Susanne Berner follows the activities of a charming, bustling town over the course of all four seasons! This series is especially amazing because each book features the same location of the town on each spread but the characters are in different outfits, different vehicles can be spotted and basically everything goes along with the season the book is titled after but with a ton of detail! This series might not have any words on the pages but that is what makes them so fun! This series encourages kids to really look into the illustrations following along with the characters and inventing their own stories.  Kids will spend hours poring over these oversized pages of vibrantly detailed drawings in this joyfully illustrated series. 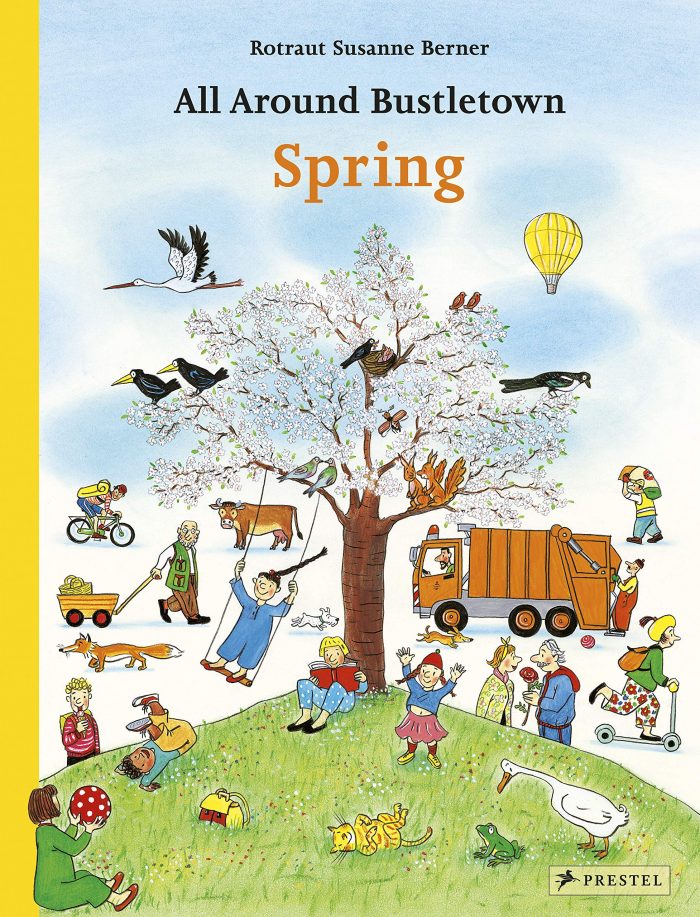 All Around Bustletown: Spring

It’s springtime in this charming, busy town and there is a lot going on! A house gets a top-to-bottom spring cleaning and farm fields are being prepared for planting. People are shopping, commuting to work, constructing buildings, and meeting friends. If you look closer, you’ll recognize the same characters appear on every page, each with their own story. There’s Wilfred the jogger slipping on a banana peel and his friend Erica who comes to help him. Three cheerful nuns shop, chat, and share a snack at the cafe. A stork surveys all the activity from the sky while a mischievous fox scampers through the streets. In the tradition of Richard Scarry and Where’s Waldo, this book encourages kids to return again and again to each spread, following along with the characters and inventing their own stories. They’ll recognize parts of their own world, while also learning about the endless ways we live, work, and play in the spring. 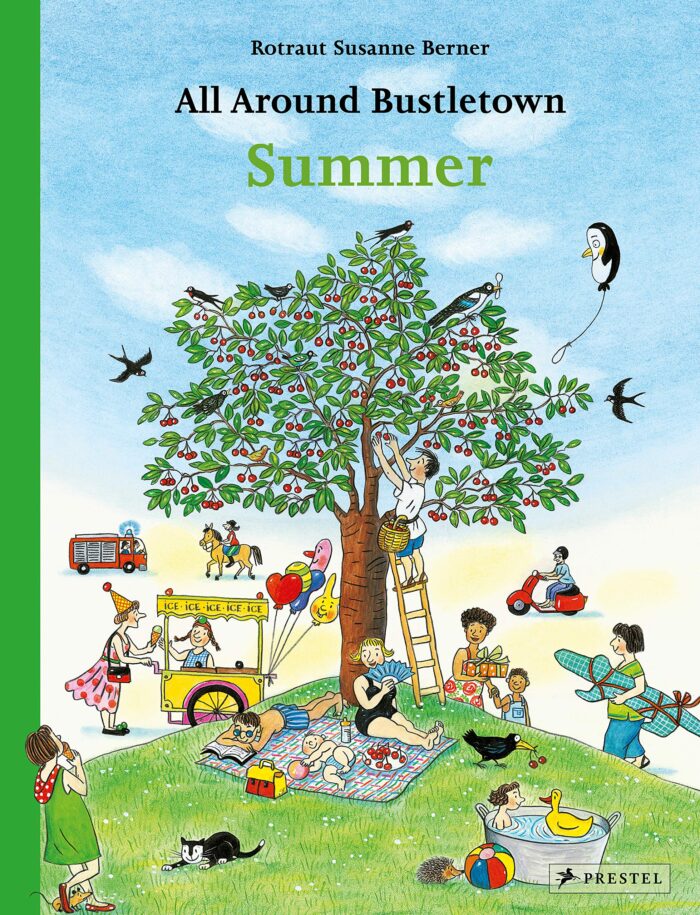 All Around Bustletown: Summer

Itâ€™s summer and that means flowers, picnics, thunderstorms, and bike rides. Itâ€™s a busy time for construction workers, farmers, and house painters. Playgrounds are filled with kids and vacationers are boarding trains in droves. In the sky a pair of balloons drifts through every scene, while on the street people of all ages make their way to an outdoor birthday party. Thereâ€™s even a big storm that turns umbrellas inside out, sends hats flying, but ends in a lovely rainbow. As kids pore over these oversized spreads, they will delight in identifying the same characters on each page as they walk, play, jog, and roller skateâ€“from homes to parks and office buildings to rail stations. In the tradition of Richard Scarry and Whereâ€™s Waldo, this book encourages kids to return again and again to these charming spreads, following along with the characters and inventing their own stories. All kinds of summer activities come alive in these endearing drawings that provide endless entertainment and spark engaging conversations. 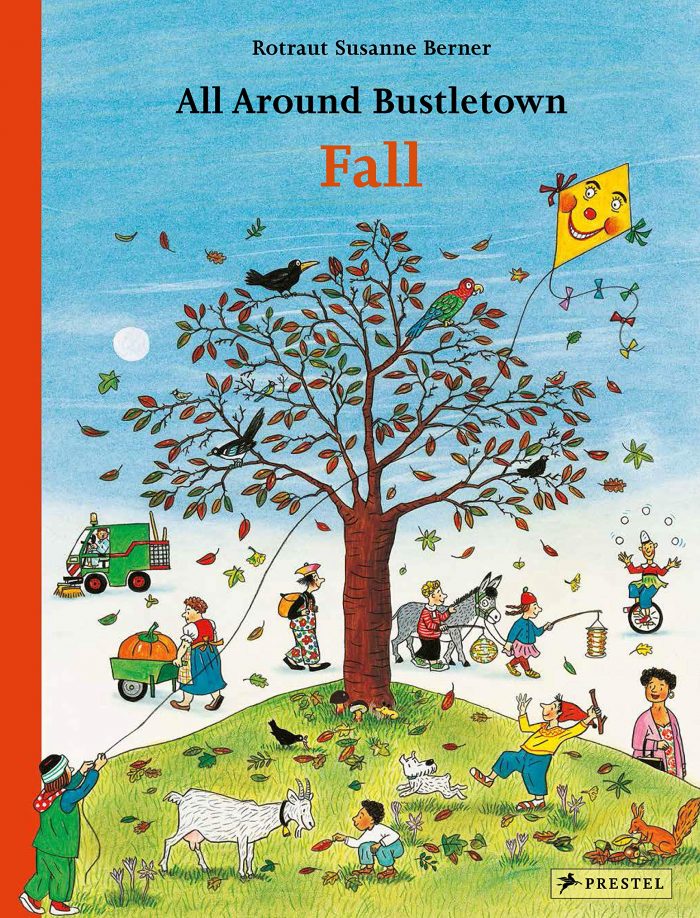 All Around Bustletown: Fall

The leaves are blowing off the trees and the birds are flying south in Bustletown. Farmers are preparing the fields for winter and kids are back in school. And look, thereâ€™s a water main break thatâ€™s causing havoc and a chimney sweeper perched on a roof! Each time readers look at these delightfully detailed spreads theyâ€™ll discover something new, whether itâ€™s whatâ€™s for sale at the outdoor market or how many pumpkins they can spot on a single page. Familiar characters appear on each pageâ€“a maestro and a violinist, a balloon-toting nun, and a mom with her baby. All the activity culminates in a harvest celebration lit by dozens of paper lanterns in every shape and size. In the tradition of Richard Scarry and Whereâ€™s Waldo, this book encourages kids to return again and again to these charming spreads, following along with the characters and inventing their own stories. As they peruse scenes from the home to the farm, from the shopping center to the park, kids will enjoy identifying the different things that fall brings. 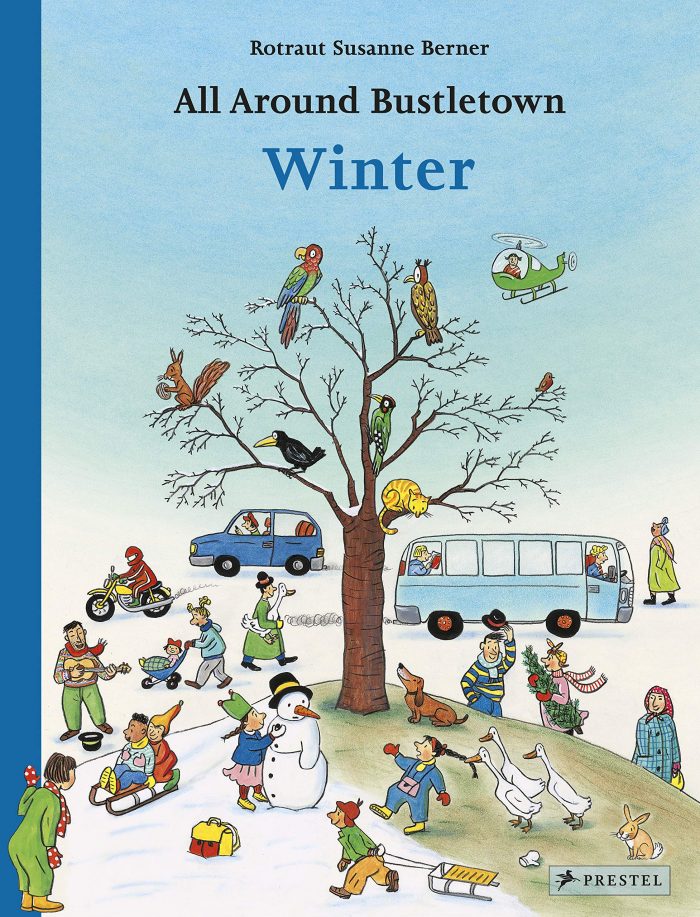 All Around Bustletown: Winter

Winter has arrived and everywhere you look people are embracing the season. At home thereâ€™s baking, reading, and sleeping in, while on the farm the fields are fallow and quiet. Outside people are bundled up against the cold as they are skating, sledding, and running to catch a crowded bus. The townâ€™s buildings are alive with activityâ€“piano lessons, a dentist appointment, shopping for presents, and visiting the museum. And if you look closer, youâ€™ll recognize the same characters on page after page, each with their own story. Wilfred the jogger has lost his keys, and Erica is shopping for a Christmas tree. Each minutely detailed scene is bursting with different people, such as a cheerful lady with an umbrella and a young violinist, as well as animals and birds. In the tradition of Richard Scarry and Whereâ€™s Waldo, this book encourages kids to return again and again to these charming spreads, following along with the characters and inventing their own stories. Theyâ€™ll recognize parts of their own world, while also learning about the endless ways we live, work, and play in the winter. 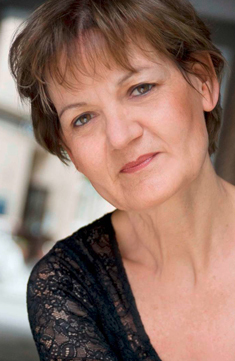 ROTRAUT SUSANNE BERNER is one of Germany’s most loved children’s authors and has earned a worldwide audience with her popular In the Town All Year ‘Round series. She is a multi-time finalist for the Hans Christian Anderson award, which she won in 2016. She lives in Munich, Germany. 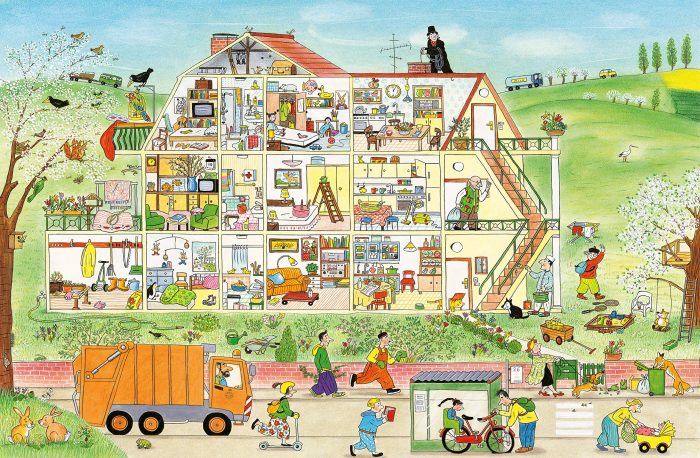 Here is just one example of how the house is the same but all the details in the illustration are different. It is so fun to look at all the differences and with so many things going on these are books that you can pick up time and time again and find something new and exciting each time. 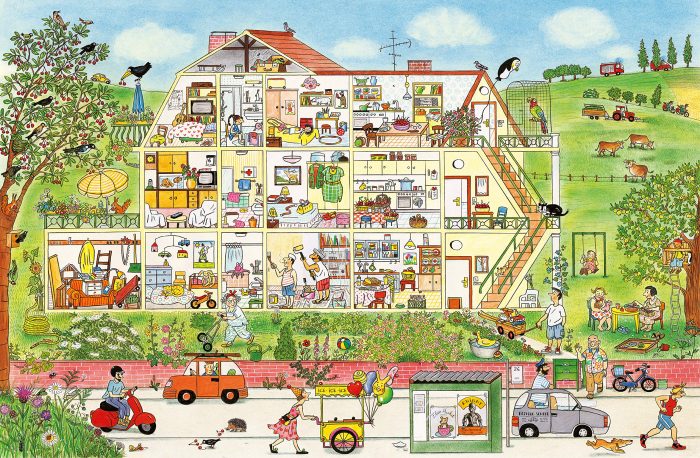 Since these are large, oversized, board books they are PERFECT for toddlers in the 2-5 age range. My almost 3 year old LOVES to read these books in bed. She will flip through the pages all on her own and I hear her chatting with herself about the books (this is by far my chattiest child). I especially love showing her the books while they are laid out on the ground so I can show here that the setting in the books are the same but all the details match up with the season! She is so delighted to point out the same characters in each book but that they are doing different things. Baby Sis especially loves the summer one right now, probably because it is always hot here in Florida and she probably thinks it is always summer here. These books are a great way to keep kids happily entertained!