I received Zatanna and the House of Secrets for this feature. Opinions expressed are my own.

Author Matthew Cody and talented artist Yoshi Yoshitani introduce readers ages 8-12 to a girl named Zatanna, who lives with her dad the magician that only appears to be good at making pancakes disappear in the latest graphic novel, Zatanna and the House of Secrets. 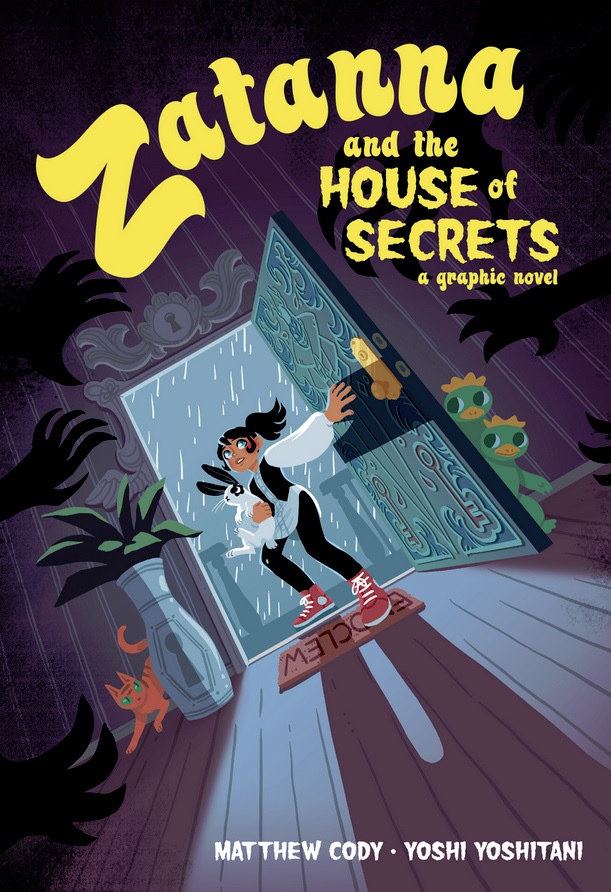 Welcome to the magical, mystical, topsy-turvy world of the House of Secrets, where Zatanna embarks on a journey of self-discovery and adventure … all with her pet rabbit, Pocus, at her side

Zatanna and her professional magician father live in a special house, the House of Secrets, which is full of magic, puzzles, mysterious doors, and storybook creatures–it’s the house everyone in the neighborhood talks about but avoids. Not that Zatanna cares, though, because she is perfectly content.

But at school one day, Zatanna stands up to a bully and everything changes … including her friends. Suddenly, Zatanna isn’t so sure about her place in the world, and when she returns home to tell her father, he’s gone missing, lost within their own home.

With thrilling twists from writer Matthew Cody and dazzling artwork by Yoshi Yoshitani, Zatanna and the House of Secrets will delight readers at the turn of every page–and the opening of every door!

Matthew Cody is the acclaimed children’s author of several popular books, including the award-wining Supers of Noble’s Green trilogy: Powerless, Super, and Villainous. He lives in Manhattan with his wife and son.

For some reason I can’t quite explain I was immediately taken by this book. Perhaps because Zatanna is completely relatable as a girl that is in the struggles of growing up. Such a tough age but learning that family and who your true friends are is not an easy lesson to learn. In this book Zatanna and her father live in a special house, the House of Secrets which is not your typical house of course. On this particular day Zatanna stands up to a bully and she turns his face red! Rushing home to tell her father she discovers he has a black eye and he rushes off to work without giving her a second look. She decides to head out to a party instead. The party ends abruptly and she loses a key that her dad was having her watch and she knows he will be upset. Once home she sees a witch in her home and her dad is missing! There are plenty of twists and turns throughout this whole story to keep any readers’ attention! This coming of age graphic novel is an absolute joy to read…especially for girls! My 11 year old daughter who LOVES graphic novels especially liked this one and told me it was “extra awesome with some cool twists and turns as Zatanna discovers who she truly is.”