I received Descendants 3 for this review/feature. Opinions expressed are my own.

This highly anticipated Disney Channel Original Movie Descendants 3 continues the contemporary saga of good versus evil as the teenage daughters and sons of Disney’s most infamous villains – – Mal, Evie, Carlos and Jay (also known as the villain kids or VKs) — return to the Isle of the Lost to recruit a new batch of villainous offspring to join them at Auradon Prep. The all-star cast returns in the exciting third installment of the Descendants Series! 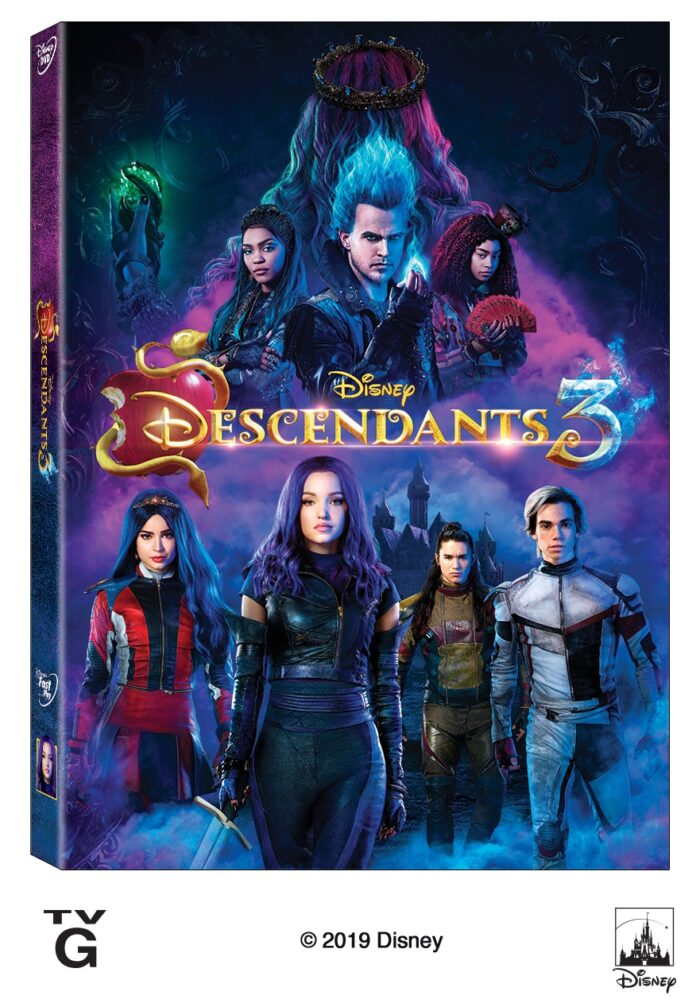 This highly anticipated Disney Channel Original Movie continues the contemporary saga of good versus evil as the teenage daughters and sons of Disney’s most infamous villains – – Mal, Evie, Carlos and Jay (also known as the villain kids or VKs) — return to the Isle of the Lost to recruit a new batch of villainous offspring to join them at Auradon Prep. When a barrier breach jeopardizes the safety of Auradon during their departure off the Isle, Mal resolves to permanently close the barrier, fearing that nemeses Uma and Hades will wreak vengeance on the kingdom. Despite her decision, an unfathomable dark force threatens the people of Auradon, and it’s up to Mal and the VKs to save everyone in their most epic battle yet.

Descendants 3 is what I am assuming is the final chapter in the trilogy and my family LOVES IT! For those that don’t know the series you get to watch villain’s kids to see what they look like and who they have become as some are selected to move over to the mainland which is ruled by a prince turned king. In previous movies they learned that being bad isn’t what truly feels right and they turn to good. In this movie 4 more kids are selected to come to the mainland to attend school but not everyone is happy with all the new changes. One person in particular sets to change everything in their favor instead. My family has been faithful watchers of the Descendants movies since the very beginning. We love the characters, the songs and the stories. Of course I can’t write this post without mentioning the sadness my heart has felt at the passing of Cameron Boyce as he has been such a big part of the Disney Channel family and thus in my home and he will be missed. It was so nice to see him on the screen one last time! Descendants 3 is fun, has a bit of a twist and we are still singing the songs around the house! This is a MUST-SEE for Descendants fans as you get to see the ending to their story! You can now watch Descendants 3 on Disney DVD!

You can connect with Descendants on Disney Channel at their website.