Big Sis is 10 years old and she is really into graphic novels lately. She has read every graphic novel her school library offers and she will read them everywhere she goes even on the 6 minute ride home from school every day! I was super excited to show her a brand new graphic novel series called Super Sons. Book 1 Super Sons: The Polarshield Project by Ridley Pearson and illustrated by Ile Gonzalez takes place during a time of global crisis and while Superman and Batman are off trying to save the world their sons are trying to do the same! 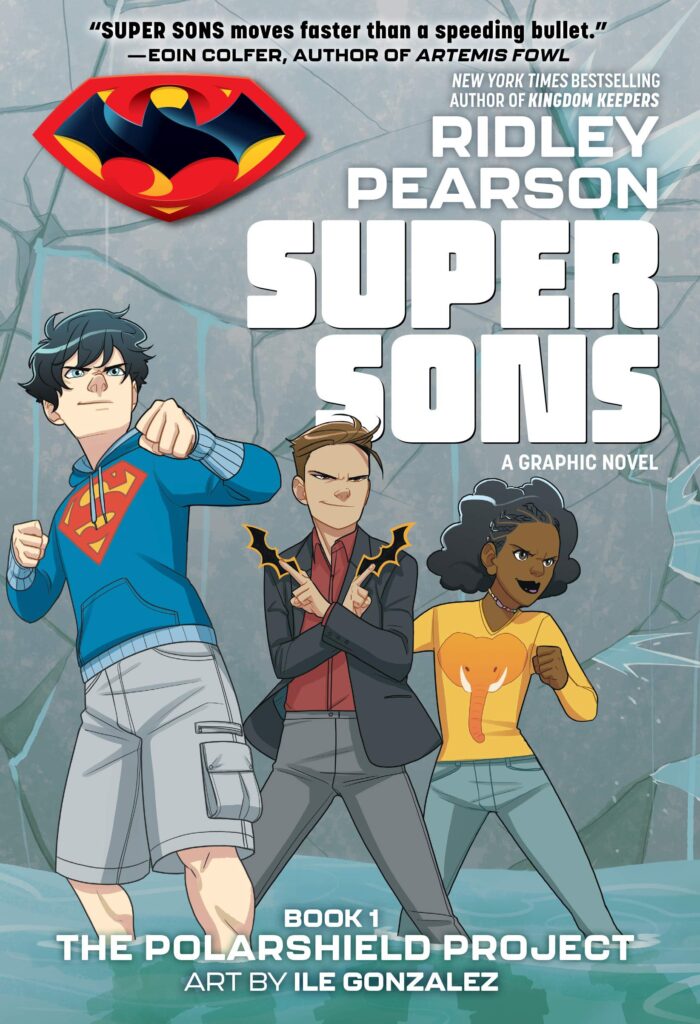 Jon Kent and Ian Wayne are opposites in every way except one–they are the sons of the World’s Greatest Heroes, Superman and Batman! To uncover a global conspiracy, this unlikely duo will need to learn to trust each other and work together to save the Earth. But who is the mysterious Candace, and what secrets does she hold that could be the key to everything?

The polar ice caps have nearly melted away, causing devastation to coastal cities. Erratic, deadly weather forces everyone inland, tearing families apart. Earth is facing its greatest crisis–and Superman and Batman are nowhere to be found.

From New York Times bestselling author Ridley Pearson (Kingdom Keepers) and artist Ile Gonzalez comes the first book in an epic new series that follows the Super Sons of Superman and Batman as they struggle to find their place in a rapidly changing world!

Check out the book trailer below:

DC Zoom is a new middle grade graphic novel line from DC. The line will introduce DC‘s most iconic Super Heroes to a new generation of fans with stories told by some of most successful authors from the middle grade publishing space. DC Zoom titles will be standalone stories, not part of DC‘s ongoing continuity, and completely accessible to new readers who have no previous knowledge of DC characters. The line will launch in April 2019 with the release of?Super Sons: ThePolarShieldProjectby Ridley Pearson with art by Ile Gonzalez.

Ile Gonzalez illustrated her first comic strip while in kindergarten, and grew up to study fashion design in college. Deciding that graphic storytelling was her first true love, she refocused her creative effort and landed her first paid work at the digital storytelling company Madefire, working exclusively for them to co-create their popular middle-grade series The Heroes Club. Super Sons is her first graphic novel, and her first project for DC.

This book is directed towards readers aged 8-12. Big Sis only has a basic background in super heroes so this book felt completely new to her. In book one we see that the polar ice caps are melting and whole cities are going underwater forcing families to move inland. Wayne Enterprises is building damns to keep the water from flooding but they fail as they are being sabotaged. Superman and Batman are trying to save the planet while their sons are trying to navigate school life when all they want to do is help their dads. The story jumps between Jon Kent and Ian Wayne but the illustrations make it easy to follow especially since in this comic one is blonde and the other has black hair. Like any good graphic novel series the book leaves us in suspense and Big Sis is eager to see how the story unfolds in the next book. This is a fun graphic novel that will show middle grade readers some famous superhero sons as well as introduce you to new characters we are only just beginning to learn about.

Previous Post: « Experience The Movie Dumbo in a Whole New Way With 4DX in Theaters
Next Post: Fun Things to Do with Your Dog at Home »