I had the pleasure of attending the Farm to Table press event with Red Gold in Indiana last week. They provided accommodations, though?all opinions are of my own. 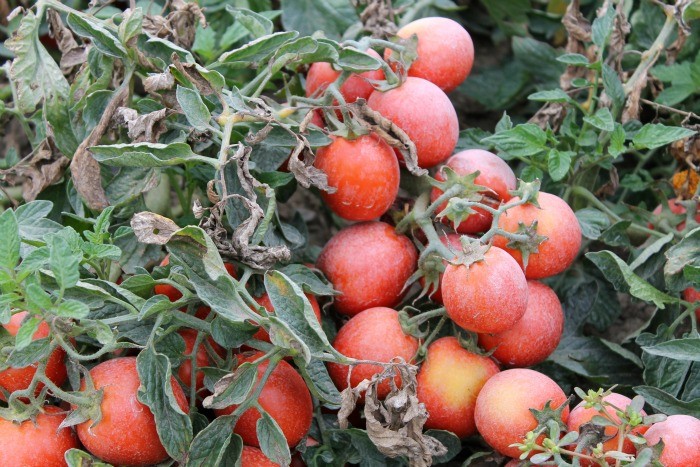 I don’t think I’ve ever talked about it on the blog before, but I actually come from a long line of farmers. In fact, the house that my family lived in when I was born just happened to be an old white farm house. Family farms are a part of my heritage and living in the Midwest, I know how important farms are . Whether you get your food straight from the farm or the grocery store, it all starts in the same place?- farms! 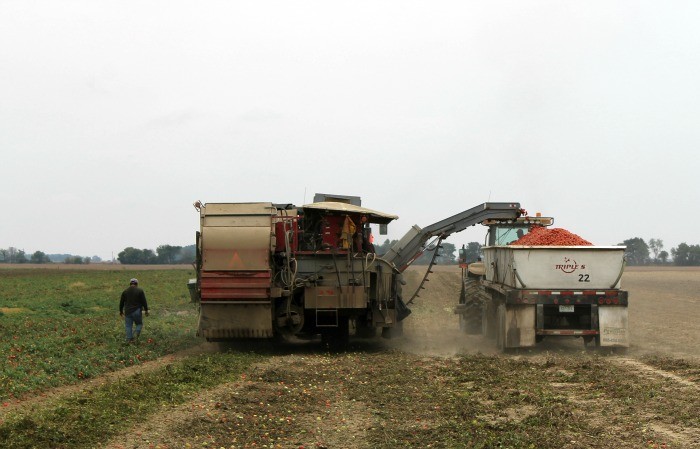 I was really excited to learn the process of growing, harvesting?and then production of tomatoes. We were able to learn about the first two during our field tour of?Tripe “S” Farms and introduction to the Smith family farmers on the first day of the event. What I found interesting right off the bat was that the tomatoes were all grown close to the ground. That would never happen in my garden because they’d all bruise once they touched the ground, but Red Gold uses a breed that has a thicker skin so ground growing is optimal for them. Another interesting fact is that Triple “S” Farms owner Scott has a sister, Selita who ended up marrying Brian Reichart ? The President and CEO of Red Gold! 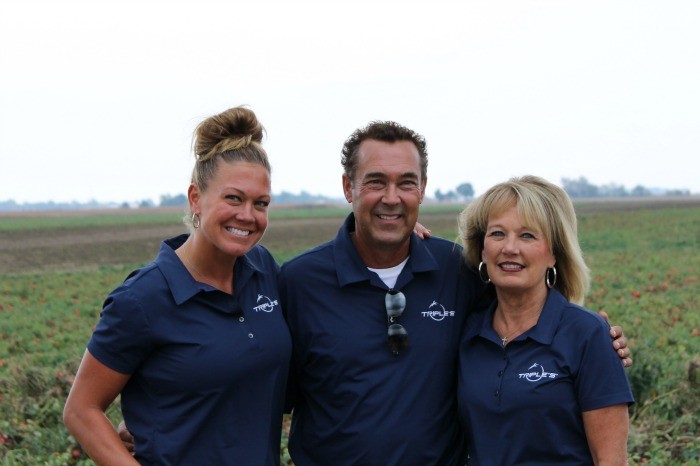 They shared with us how the tomatoes are picked from the fields and immediately put onto a truck, which when full head straight to one of the production factories {which I’ll share more about later in this article}. We learned that Red Gold works with around 50 farms in Indiana, Michigan and Ohio to grow their tomatoes and has strict guidelines when it comes to production. Any unripened tomatoes left in the field after harvest are used as compost in that field for the next growing season, so nothing goes to waste.

Weather is the Midwest is much different than other parts of the country so our growing season is quite different. Because of this, the tomatoes are bred to become ripe around the same time so that production can be as smooth as possible. Red Gold’s farm partners harvest all of their tomatoes during a 10 week period from mid August through mid October.

We enjoyed a cocktail reception and dinner at the beautiful Kelley Agricultural Museum in Sharpsville, IN. Not only was the setting absolutely gorgeous, but we were able to mingle with the Reichart family. I absolutely love how down to Earth and humble their entire family is. It’s not something that you often see in corporate America and many of their farm partners had wonderful things to say during a video presentation. Old fashioned values is something this country definitely needs more of! 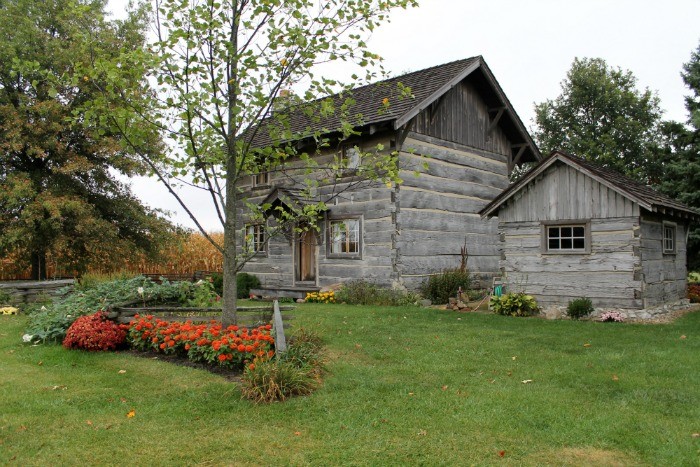 We learned that Red Gold’s slogan is “Grown by Families, Enjoyed by Families” and that their goal is to produce the freshest, best tasting tomato products in the world. The Reichart family, along with Brand Manager Jorge Cardenas introduced us to their FY16 plans and how they’re working as a company toward that goal. Their plan is to be completely sustainable and they take recycling seriously; from the farm to the production facilities. 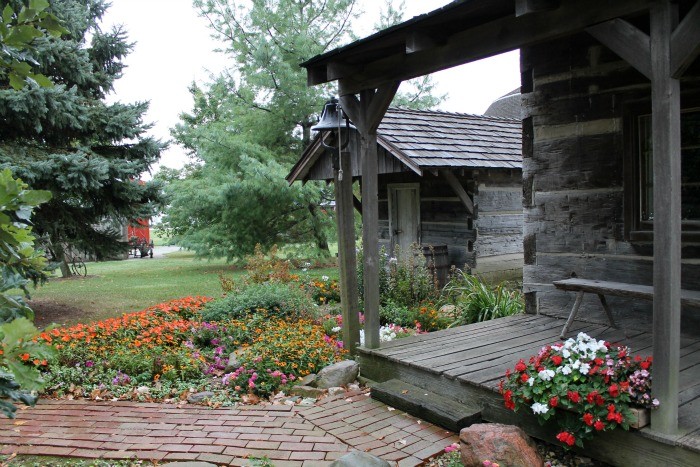 The next morning, we enjoyed a light breakfast and introduction to Red Gold at the Red Gold Corporate Office. Their sustainability plays such a part in the everyday activities, that the?Red Gold Corporate Office actually used to be an elementary school. They needed to up size but saw no need to build a new facility when there was already a perfectly good space available. In fact,?Cole Reichart, Fourth Generation Owner of Red Gold went to elementary school in that very building!

The Red Gold team shared all about their process and how they have really changed for the better – leading the way in food production with new Non BPA/BPS Liners. Their tomato products are also Non-GMO, Gluten Free and so much more. 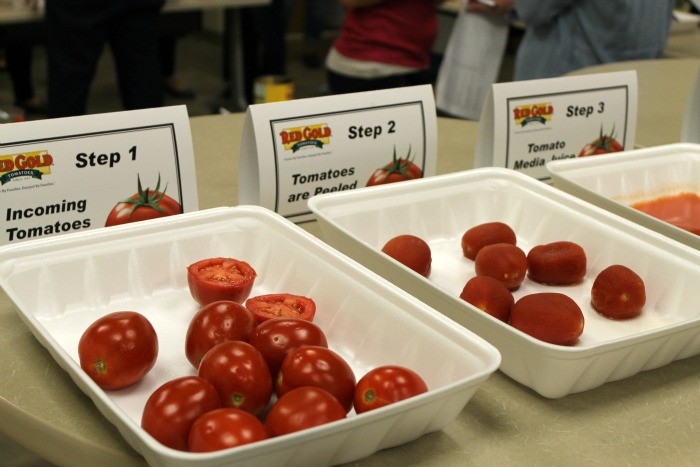 We took tours of the Red Gold Orestes and Elwood facility and learned all about the production process for making tomato products. As soon as we got to the first facility in Orestes, we noticed the semi trucks full of tomatoes, like the ones we saw being loaded at the farm. Those trucks arrive at the facilities no more than 8 hours after the initial harvest of the tomatoes and are unloaded and produced into product within 48 hours. Once the production team is ready for a new truck of tomatoes, it goes into a washing area, where the tomatoes are cold washed off the truck, to prevent bruising. The water used for this is actually recycled and used over again for other trucks full of tomatoes, playing a large role in the company’s sustainability practices. 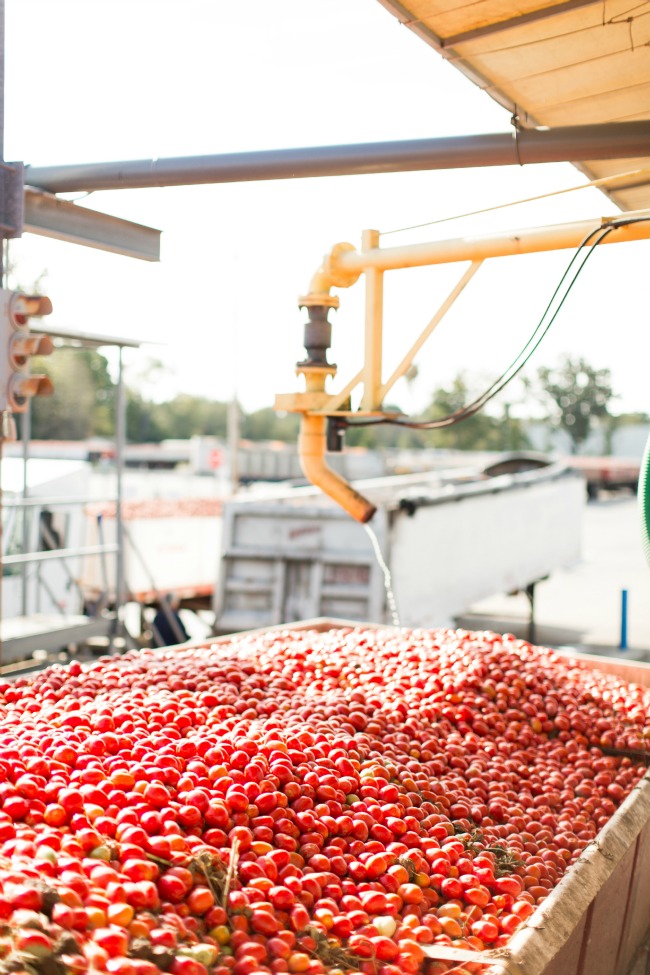 Once the tomatoes are washed off the truck, they then go into an actual washing process to remove dirt and debris. They are also sorted at this time and any green or damaged tomatoes that got through are then discarded, but later used for other things; going back to sustainability!

We didn’t get to take photos inside the facilities but it was very interesting to see the whole production process and it was a wonderful experience. The owners, Brian and Selita were actually our group tour guides at the Elwood Facility, so it was really nice to see them in action and get to know them on that level. 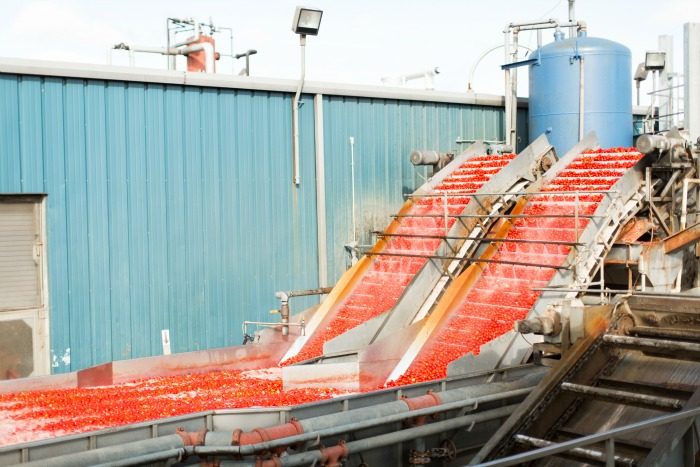 I’m sure many of you are fans of Luke Bryan and one of the perks of our trip was attending the first concert in the Luke Bryan Farm Tour 2015 in Fort Wayne, IN. Red Gold was proud to sponsor Luke’s tour when they found out that he would be donating proceeds to educate future farmers of America. Way to give back, Luke! 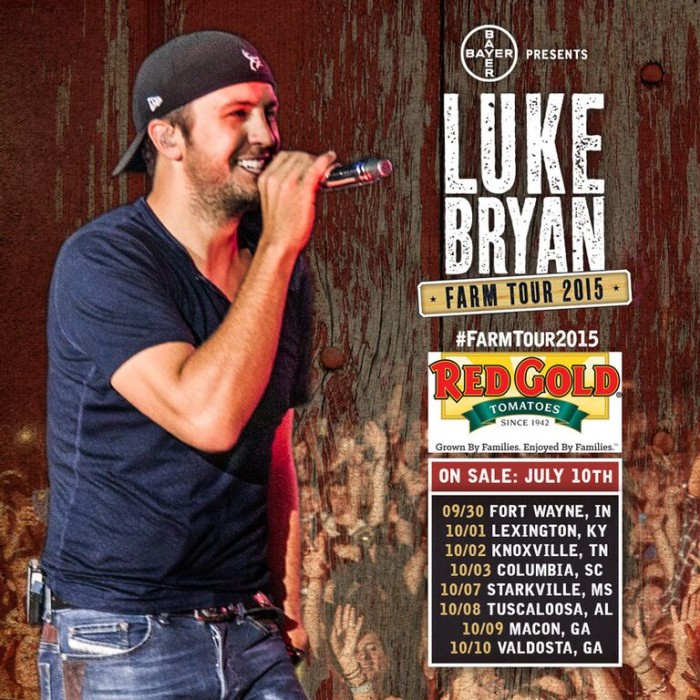 Earlier, I mentioned that the tomato harvest season is 10 weeks long. During our time with Red Gold, we learned that they double their production staff during those 10 weeks, bringing in many of their workers from Texas. Red Gold has a community of homes that they house these seasonal employees in for 10 weeks, rent free. I thought that was just wonderful and most definitely worth sharing. It’s so wonderful to see a company that truly cares about the people who work for them!