The Fart Squad is back in a second volume with Fart Squad #2: Fartasaurus Rex. So you don’t miss out on how this book series started check out my review for the previous gas filled adventure. Radioactive school lunch burritos have given a group of students a super power unlike any other…the gift of gas. 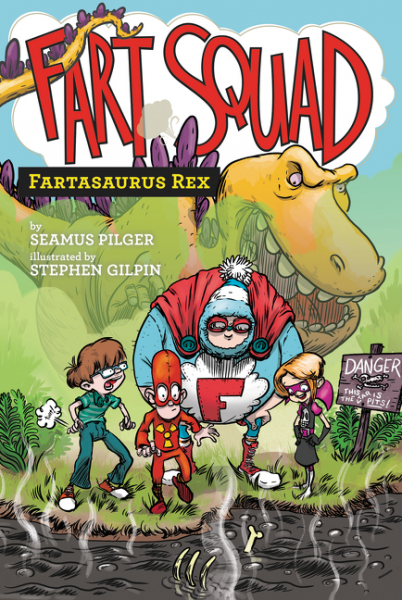 Standing up against bad guys (and downwind of everyone else), it’s the smelt-it, dealt-it, you-can-fasten-your-seat-belt-but-they-might-melt-it . . . the fearless FART SQUAD!

Darren Stonkadopolis and his gutsy friends made history when they saved Buttzville by using their fantastic flatulence to face down evil. But now can they hold their own against the foulest beast ever to roam the earth?

When the fourth grade class takes a field trip to the Natural History Museum, Darren cuts more than cheese?he accidentally melts a petrified tar pit and unleashes the beast trapped inside. Now Fartasaurus Rex, the only animal to hunt using the strength of its stinks, is loose in the streets. It’s time for the Fart Squad to get prehistoric on the malodorous monster before the whole town becomes fossil fuel!

In the first book *spoiler alert* the fart squad learns to control their new found power. That is until they head off to a field trip to the local history museum. One of them is unable to contain a monstrous fart and it is so rancid it melts the tar pits and unearths a real live Fartasaurus Rex. The Fart Squad reloads with more radioactive burritos and hunts down the dinosaur before he can destroy the town. This is one of those books where you just can’t control your laughter while reading it. It is a fun read that really keeps a child’s attention. A whole series based on the power of farting. A seriously great book for a reluctant reader or for any child that enjoys a good laugh.