You are here: Home / Blog / The Only Book You Should Be Reading Right Now – Miracle Man by William R. Liebowitz
“As an Amazon Associate, I earn from qualifying purchases.”
Tweet
Pin
Share
Share
0 Shares

~I received a copy of Miracle Man by William R. Liebowitz for review. Opinions and stories are my own.~


I had put off reading Miracle Man until I got Tot into school because I had a feeling it was going to entrap me. There was something about the way the eyes on the cover kept staring at me that I knew there was no way I was going to put the book down. I was right, it was spell-binding from the very first sentence. Miracle Man began with a horrifying jolt that sent you on a page turning thrill ride that not even the ending could release you from. 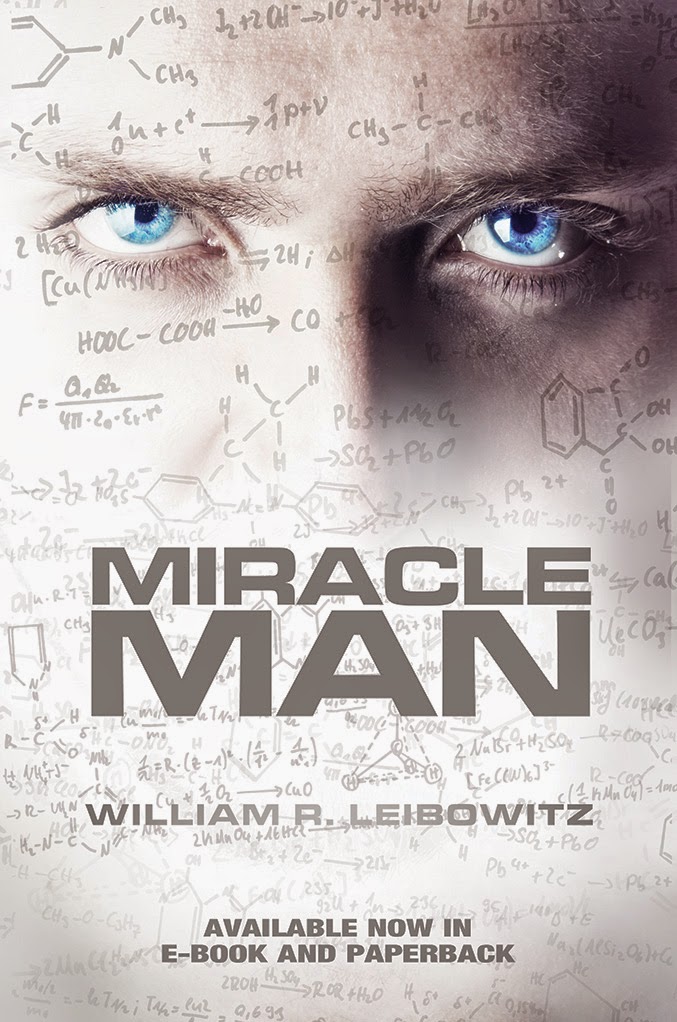 Before the main character could even utter his first word, he was a victim of a horrifying crime. A child of superhuman intelligence, Robert James Austin rises as the greatest genius in human history, formed by desperation and self-destruction. His ability to weave the sciences together through the linked language of mathematics is beyond anything anyone has ever seen (or could understand). His devotion to finding cures for diseases brings agents of greed and anti-western radicals against him, all while he finds himself carefully holding onto the precipice of sanity.

William R. Liebowitz is a mastermind storyteller and his character becomes so alive on the pages. The aching realness of him is what sets this book apart from other stories with superheroes or anti-heroes. His feelings of inadequacy, abandonment and betrayal are all to real to those of us who understand those feelings. And for some of us, what it feels like to get lost in the madness of our own mind and the inescapable nightmares we find waiting in the dark.

Eventually, Bobby fell asleep. It didn't take long for the nightmares to kick-in with full force and now there was new material with which he could be terrorized. It was as if he were there at his own birth watching it all unfold, his newborn cries echoing eerily through an abandoned factory building in which his mother, a teenage drug addict, lay on a blood stained blanket on the cold concrete floor. His cries seemed so small, so inconsequential, so pitiful as they reverberated through the decrepit cavernous structure. There was no welcome for him. No teary eyed parents, filled with gratitude and wonderment. No doctors and nursing staff officiously performing their duties. No incubator to warm its new occupant. There was only silence punctuated by the urgent cries of a tiny human being thrust into a world that didn't want or need him.

The only part that I felt was redundant or unimportant in the book that it could have had less of, is the overcompensation for how beautiful the main character and his lover were. I get that there is this a point: the concept of the anti-celebrity and beauty-does-not-negate-intelligence, but it is a little overdone. The nice thing about Robert (aka Bobby) is that he is a real person and overcompensating his attractiveness (and that of his lover) to ethereal status kind of dilutes the ability to relate to them.

Over the next few months, Bobby immersed himself in researching various diseases and the progress that had been made in science's efforts to find cures. He was dismayed. Tens of billions of dollars had been spent on research and where were the cures? No major disease had been cured in decades. Research seemed to be fragmented, unfocused and uncoordinated, with much duplication of effort, and researchers going off on their own tangents, distracted by forays into matters of general academic interest. Cure research appeared to be a self-perpetuating industry of its own with no sense of urgency but lots of people making a living from it. And more often than not, the thrust was not to find a cure, but to create a treatment?a product that could be sold. Ongoing treatments with drugs rather than cures seemed to be the focal point. Keep selling those pills day after day rather than eradicate the need for them. Was that cynicism or reality? Bobby didn't know.

Outside of that minor detail, the book is incredible. It could have ended cheesy, it could have ended overdone or a hundred different things... but William R. Liebowitz ended it spectacularly. I was very pleasantly surprised and excited, so much so that I still haven't been able to get the story out of my head.

Get this book. On amazon, at the store, or on your phone - wherever. You will not be disappointed.

Make sure to take a moment and "Like" Miracle Man on Facebook and @MiracleManBook on Twitter. You can find excerpts of the book on both social media pages.