You are here: Home / Blog / What Seeing The Liberty Bell Meant to Me
“As an Amazon Associate, I earn from qualifying purchases.”
Tweet
Pin
Share
Share
0 Shares

As many of you know, I recently took a little trip to Philadelphia, Pennsylvania. The purpose of my trip was to cover the Marvel Universe LIVE! show and I had an epic time. What many of you do not know however, is that I had a choice between three cities where Marvel Universe LIVE! would be performing. Ironically, one was in Raleigh, North Carolina and I would have been able to meet up with my lovely contributor Becki. Another show was in Orlando, Florida where both Katrina and Danielle reside. I was over the moon and so thrilled that I immediately asked each of them how close they would be, so that we could meet. I'd have jumped at the chance to meet any of these ladies. And I almost did.

But then I heard that there was a show in Philadelphia and I knew that it was fate, that I should go there. 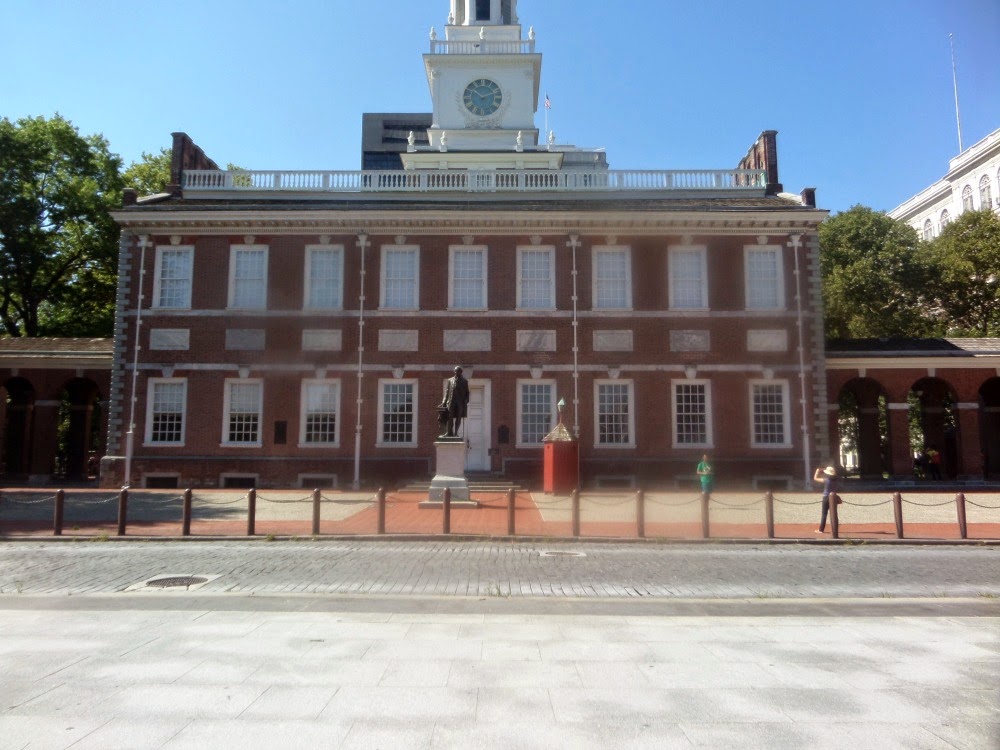 You see, my parents got married when I was just a small girl. I was 5, almost turning 6 years old. My mom had met and fell in love with an amazing man, a man who eventually became my father, the only father I've ever known. They took their honeymoon shortly after their wedding and the honeymoon destination was Philadelphia, Pennsylvania. My Grandma's sister lived there, so they were going to visit my mom's aunts and cousins.

My parents drove all the way to Philadelphia in a rental car from Milwaukee. I remember looking through their photos while I was growing up. They took pictures while on the road, through the car's windshield and other memorable photos throughout their trip. I remember seeing photographs of The Liberty Bell and that's the one thing that really stuck out to me since those photographs are now lost forever. I remember my dad talking about The Liberty Bell and how neat it was to go see it. 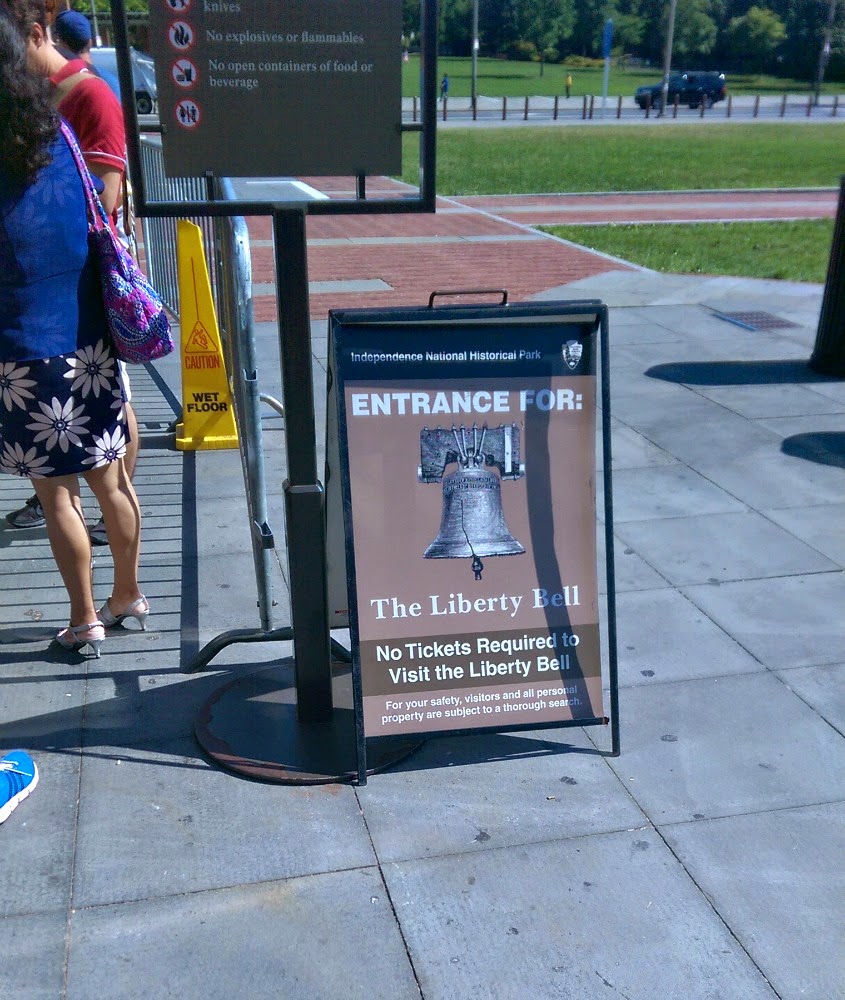 I stood by the sign, at the entrance to The Liberty Bell and I almost lost it. Tears almost started flowing, but I wouldn't let them, because I needed to be stronger than that. Besides, I didn't want to look like a fool, sitting outside the bell crying all by myself! But nonetheless, it was an emotional moment, a moment where my heart skipped a beat.

I finally got into the building and put my purse down for Security to rummage through. The guard was eating pretzels, taking his time and he must have seen the look on my face and mistaken it for hunger. He asked if I wanted one, I laughed and said "No thanks".  You see the "look" was really annoyance. I wanted to get to that bell! 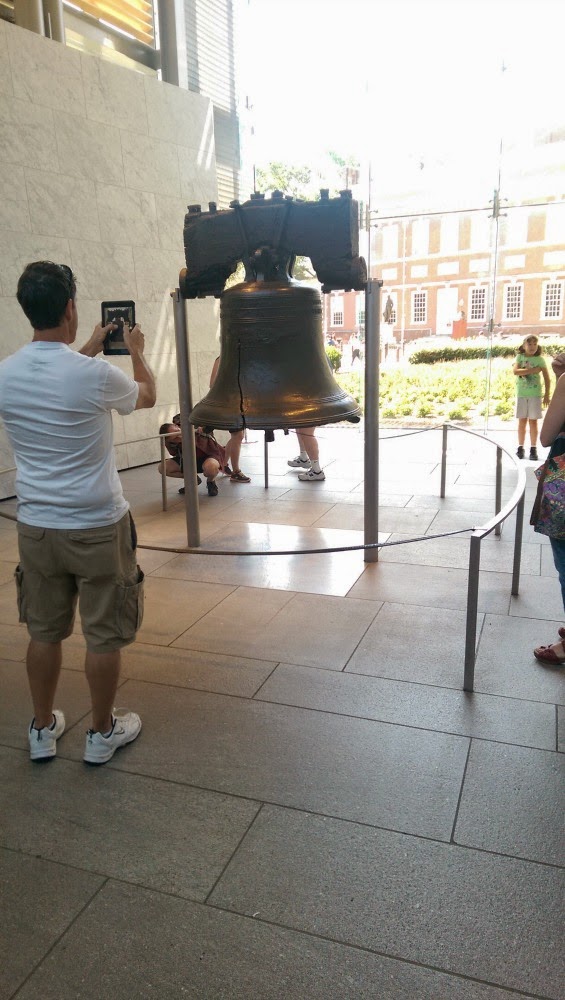 I did get to The Liberty Bell soon after, first browsing very quickly through the other little areas which were before the bell. It was all interesting, don't get me wrong, but I had one purpose and that was to see The Liberty Bell. 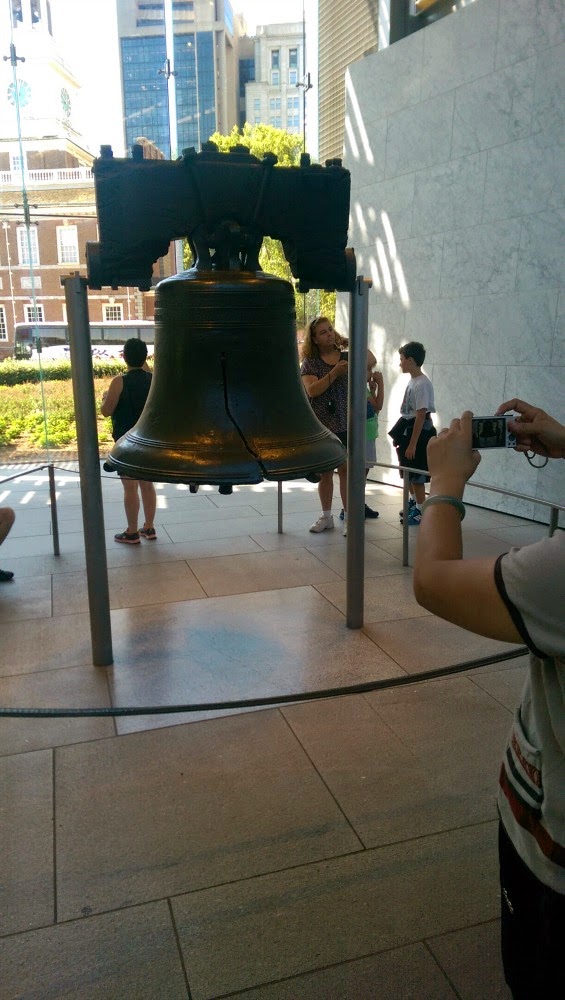 I took photos every time that I could get a shot in when there weren't dozens of other people in my way. In my mind, that's what they were doing in those moments, just getting in the way of the precious memories I wanted to capture through photos. 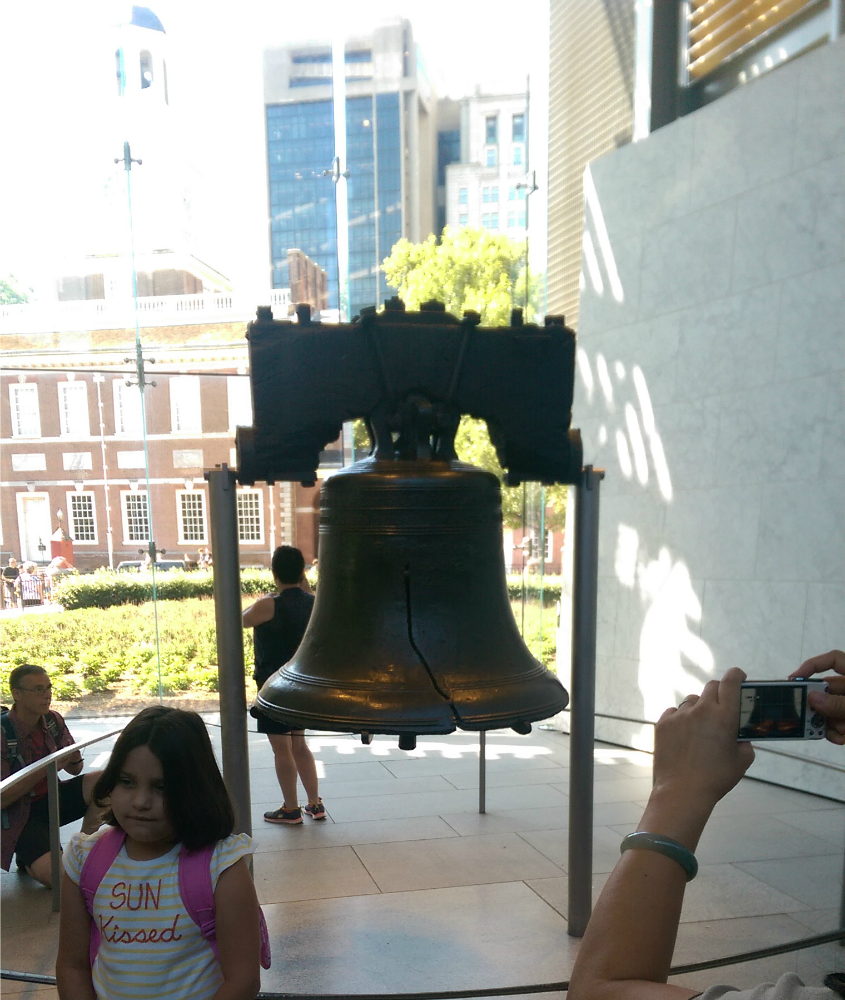 It was beautiful. It was breathtaking. It was everything that I had imagined, and I finally got to see it. 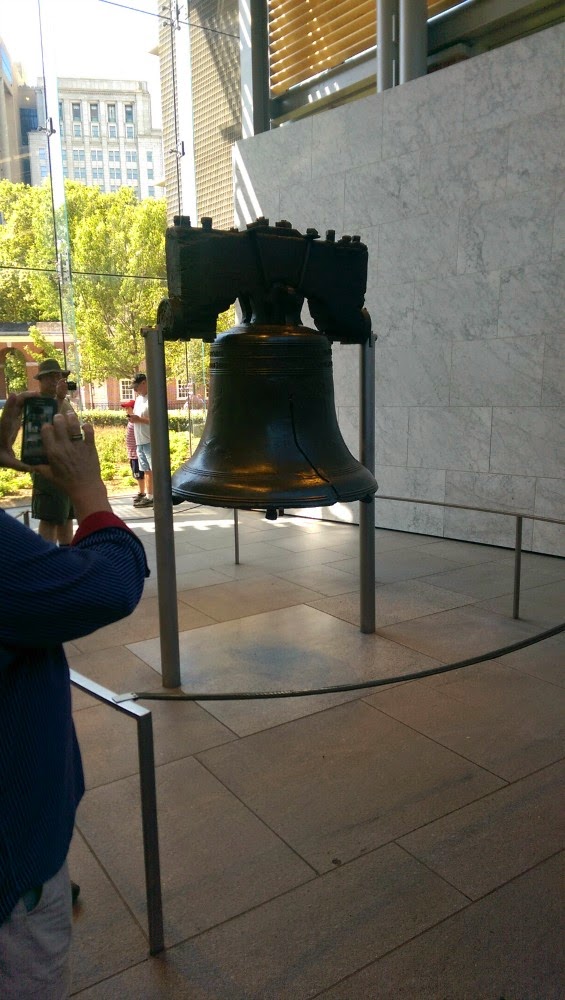 I stood there, staring; all by myself in a big city. But I didn't feel alone. I felt his presence with me the entire time. I stood some more, just admiring the beauty of the bell and then I found a seat and enjoyed it, while sitting in the background. It may sound silly to some, but it was one of the most emotional moments of my life and I had to treasure it, letting it last as long as it could. In that moment, I felt closer to my dad than I ever have since the day he passed away and left this Earth. I felt his spirit in me and I was at peace. 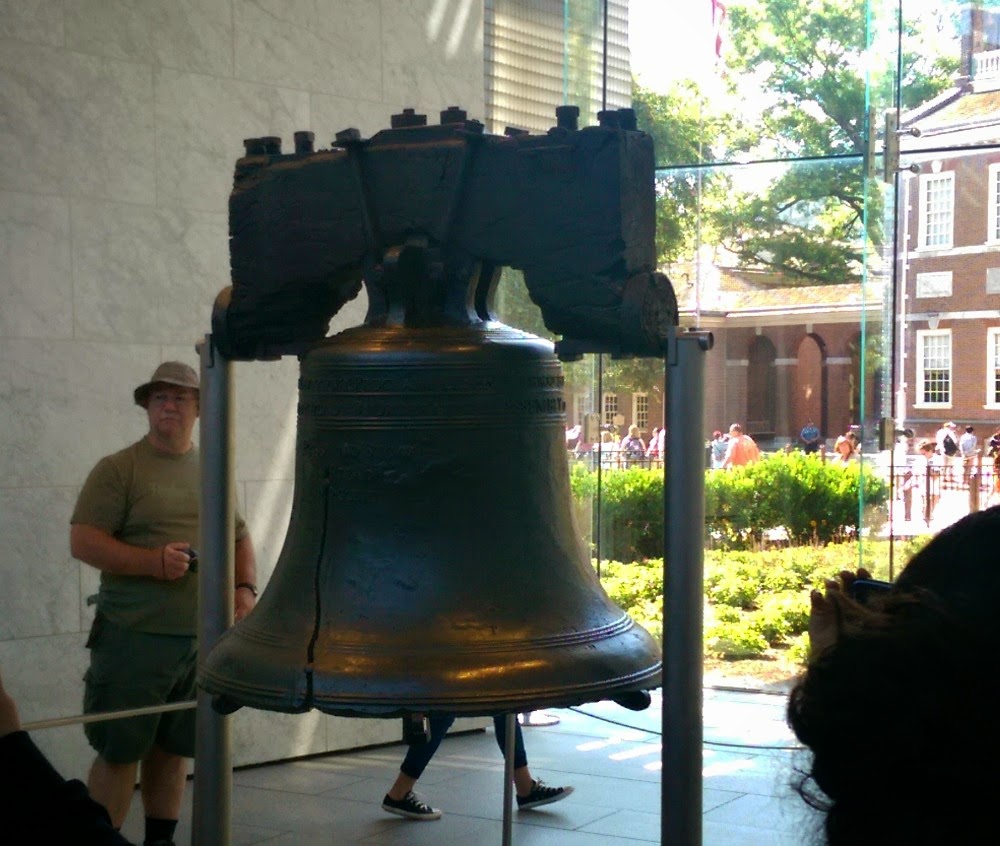 Once I felt that I could move on my own two feet again without falling over from the crazy emotions running through my heart and mind, I stepped outside and visited a few other places in the area. 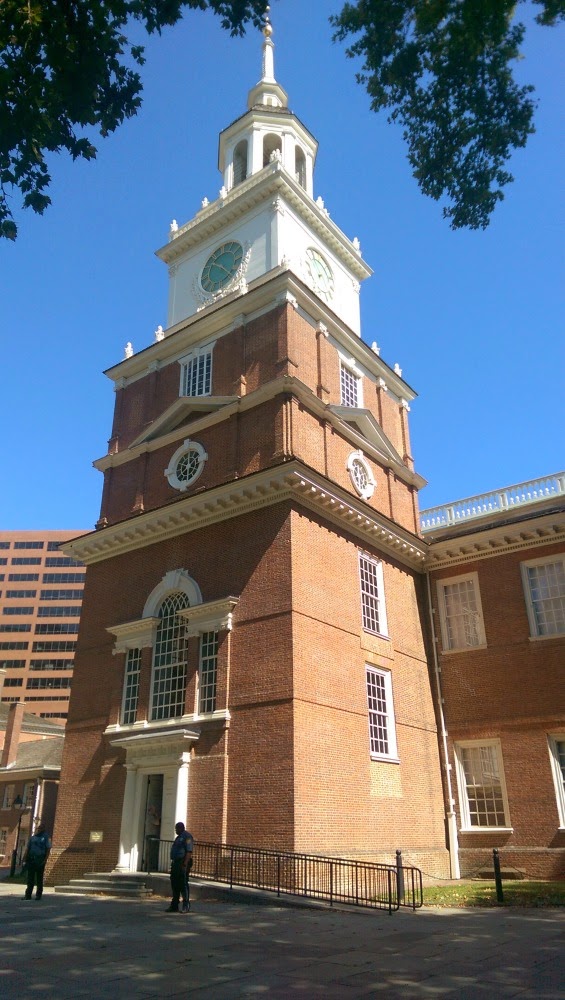 I just walked, taking in the sites and capturing photos,not even realizing what exactly it was that I was looking at. The buildings were beautiful, don't get me wrong, but I had served my purpose, saw what I had come all this way to see. 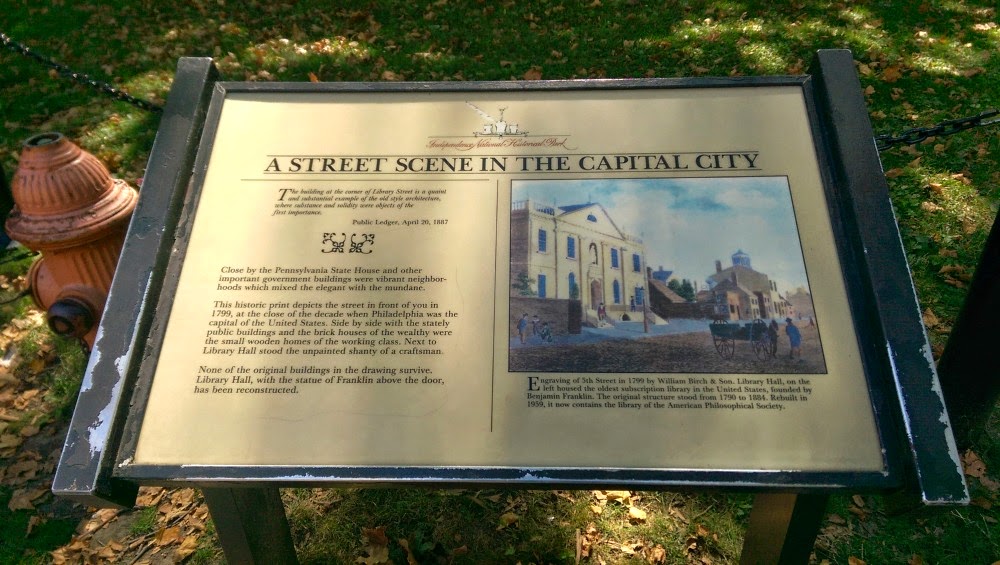 I will never in my life forget that day. I will hold on to these memories in my head and the photos that I took. I will remember those moments and the rush of feelings that came in those minutes that seemed like hours. 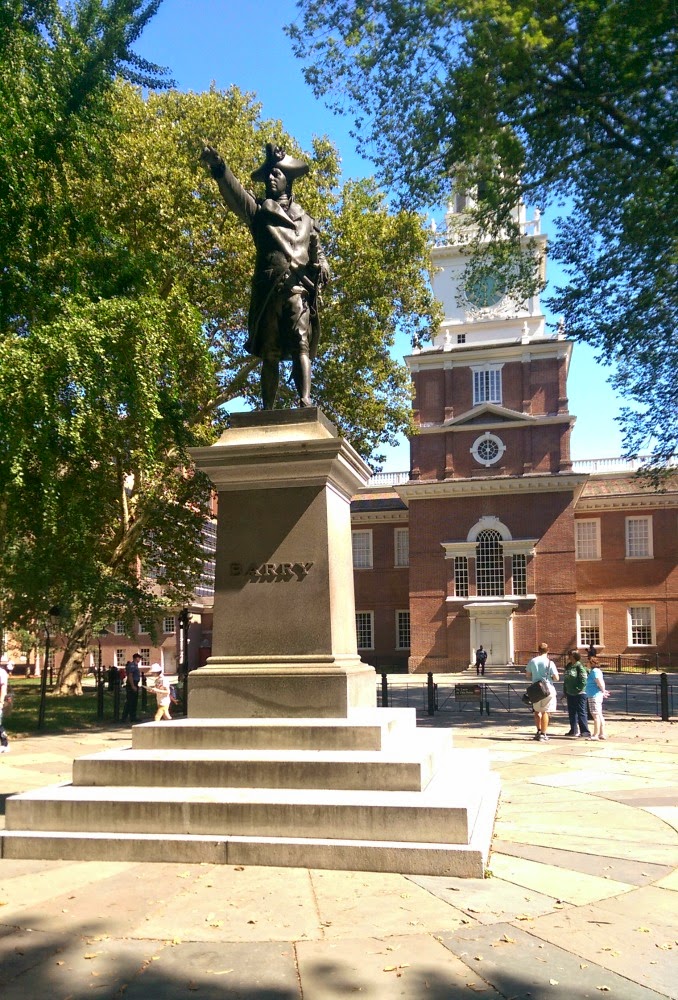 Philadelphia is an amazing and absolutely breathtaking city, especially rich with history. I will return one day, hopefully with my family. And we will see the sites. We will take days walking around, reading every plaque and learning so much of our country's rich history. But this day was not for this kind of history. This day was for my own history and for me to see something that meant so much to the man that still means so much to me. 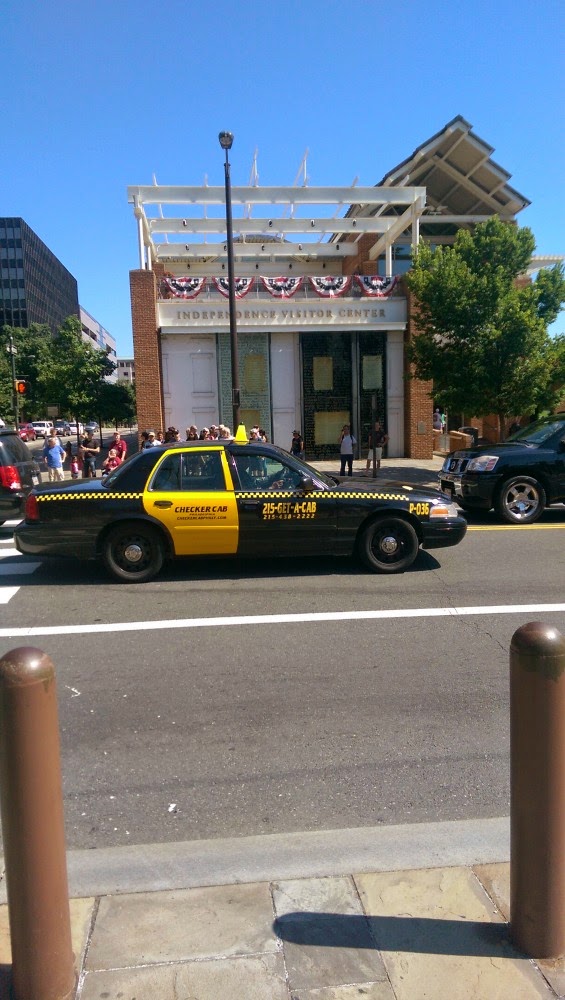