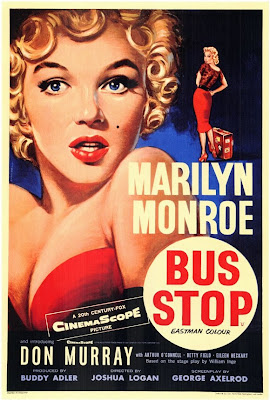 Marilyn Monroe is just as iconic today as she was bursting onto the scene in Hollywood in the late 1940's and really picking up momentum in the 1950's. From her signature hair style (which may have inspired me in high school to lob and dye my own locks) to her well-known, well-discussed beauty mark, Monroe is well known around the world as a 'bombshell', singer, and comedic actress. Few remember her dramatic roles, like Bus Stop which is available on Blu-Ray for the first time.

Bus Stop starts out with Beauregard "Bo" Decker [Don Murray in his first movie role & OSCAR-Nominated performance], an extremely na?ve ?and green 21 year old wannabe rodeo rider making his way to the big city with his father-like friend, Virgil [Arthur O'Connell]. On the bus ride, Virgil convinces Bo he needs a girl and Bo takes it upon himself to find a "real hootenanny of an angel" and decides he's going go rope himself a wife. Working at the Blue Dragon Caf? in the city is  talentless but driven chartreuse who calls herself Ch?rie. She dreams of going to Hollywood and Vine but it seems nobody has had the heart to her that she's nothing more than a pretty face.

The night before the big rodeo, Virgil and Bo end up at the Blue Dragon Caf? and as Ch?rie gives an off-key but hauntingly sad rendition of "That Old Black Magic", Bo finds himself head over heels for her. Following her back stage, Bo forces a kiss from Ch?rie and thinks that after the fact, the two are engaged.

With the heartbreakingly vulnerable and child-like innocence of a broken girl, but the air of a woman who has known a few men and the thick-headed but innocent ways of a boy who has never known life outside the ranch, the pair make an off-beat but dynamic couple. The film continues with Bo kidnapping Ch?rie in the hopes of taking her back to his home to make the pale angel his wife. Soon, they find themselves stranded at Gracie's Bus Stop thanks to a bad snow storm and a growing awareness that Ch?rie is not there of her own free will dawns on the rest of the bus patrons. Will Ch?rie ever escape Bo or will they find love together? I'd hate to ruin the ending of this drama, so you'll have to just buy the Blu-Ray and experience all the fleeting comedic and downright raw moments for yourself!

Bus Stop is truly one of my favorite Marilyn Monroe movies. She gives a passionate performance and makes you feel for Ch?rie in such a short time, you'll wish you could reach into the screen and offer a hug or tissue. I find it surprising she was snubbed for nominations for the role. The film was originally released August 31st, 1956 but can be yours today on DVD and hi-def Blu-Ray.

Buy It
You can purchase Bus Stop on Blu-Ray from the Fox Connect website for $15.99


I received a sample product for this review. All opinions expressed are my own and/or families. Take it or leave it. Click here to view the whole disclosure policy.