“Pirate’s Booty is a deliciously baked, all-natural snack that kids love and moms feel good about adding to the lunchbox.  Pirate’s Booty is gluten and tree-nut free, so it’s safe for kids with allergies and their classmates too.  Pirate’s Booty is made without trans-fats and ingredients you can?t pronounce.  Also, it’s more convenient than ever, as Pirate’s Booty Aged White Cheddar now comes in half-ounce size multipacks that are only 65-calories per pack!” 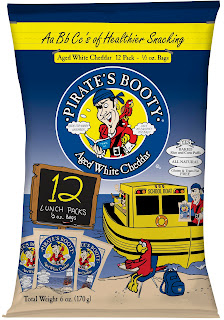 Here in New York, school has been back in session for three weeks.  While I love back-to-school time, I don’t like packing lunches.  In fact, I hate it.  The school my kids go to doesn’t have a hot lunch program, so I pack all of my kids lunches, five times a week.

I was so excited to give Pirate’s Booty Aged White Cheddar a try!  Even more exciting….my kids LOVE it!  Woo-hoo, we are all in agreement on Pirate’s Booty Aged White Cheddar!  My girls are eating half a bag for morning snack. I was surprised they didn’t eat the whole bag.  Both girls continue to say, that a half bag fills them up at snack time! I love that.  My son eats his with his lunch, but I have eliminated his sugary fruit bars and fruit snacks.  I couldn’t be happier! 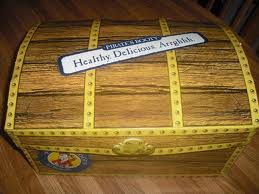 Also, our Pirate’s Booty Aged White Cheddar came in an awesome treasure box.  My kids have great ideas for the future use of the treasure box:  Prize box at our annual Halloween party, special treasure box to keep a much treasured rock collection in, storage box for extra Lego pieces, the school’s surprise box in the office and on, and on!  Isn’t it a pretty cool box?


You can connect with Pirate’s Booty (Pirate’s Brand) on-line, or on Facebook.

The Giveaway:  It just keeps getting better!  We are giving away TWO prizes (that’s right, TWO!).   Each prize will consist of two Pirate’s Booty Aged White Cheddar half-ounce 12-packs (that’s a total of 24 half-ounce bags ? enough for a month’s worth of school lunches!) and some fun pirate swag.


To enter the giveaway please follow all of the directions below! If you don’t follow the rules, you can’t win!