I received Batman: Overdrive for this feature. Opinions expressed are my own.

Batman: Overdrive is an exciting graphic novel by Shea Fontana and illustrated by Marvelo Di Chiara for readers aged 7-11. In this graphic novel we get to see how young 15 year old Bruce Wayne builds his very first batmobile. 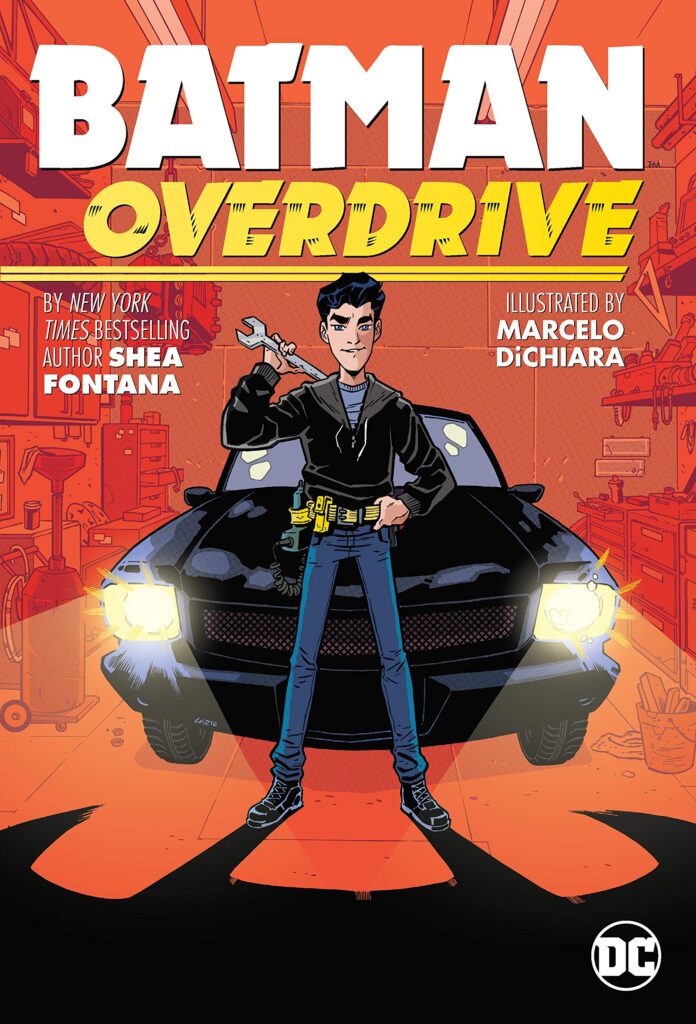 Batman: Overdrive tells the story of how a young, pre-Batman Bruce Wayne came to build the Batmobile while still processing the pain and guilt of his parents’ death, and how he comes to understand that he doesn’t have to walk through life on his own.

Driven to solve the mystery of his parents’ murders, teenage loner Bruce Wayne hones his detective and combat skills as he scours the underbelly of Gotham looking for clues. Feeling responsible, Bruce is eager to find someone to pin the blame on so he can absolve himself of the guilt he feels. His quest for freedom while still clinging to the past is revealed in his effort to rebuild his dad’s first car. Finding the correct parts forces Bruce to open himself up to new friendships and challenges, ultimately leading him to what he desires most: freedom!

Batman: Overdrive by writer Shea Fontana and artist Marcelo DiChiara is a heartfelt story touching on the importance of friendship, trust, and forgiveness.

Shea Fontana is a writer for film, television and graphic novels. Her credits include DC Super Hero Girls animated shorts, TV specials, movies and graphic novels, Polly Pocket, Doc McStuffins, The 7D, Whisker Haven Tales with the Palace Pets, Dorothy and the Wizard of Oz, the upcoming Muppet Babies series, two Disney on Ice shows, and the feature film Crowning Jules. She has also written for top comics titles including Justice League and Wonder Woman.She lives in sunny Los Angeles where she enjoys hiking, aerial dance, and snuggling her puppies.

In this story we see a coming of age Bruce that is still upset over his parent’s death. He is mad at the world including his very own Alfred. He does take a liking to one of his dad’s favorite cars and decides he wants to get it fixed up. In the course of fixing it up he meets two new friends. As with any friendship things get hard and Bruce has to learn some important life lessons about family and friendship and what he plans to do for his future using his dad’s company. This graphic novel is a fun take on the Batman origin story and one that is full of excitement as well as hard life lessons. My 11 year old daughter is our resident graphic novel enthusiast and she loves this book. I especially enjoyed getting an exciting backstory of Alfred in this version and the illustrations are exactly what I wanted and expected to keep me turning the pages.