You are here: Home / Books / Mae Among the Stars by Roda Ahmed
“As an Amazon Associate, I earn from qualifying purchases.”
Tweet
Pin
Share
Share
0 Shares

Mae Among the Stars by Roda Ahmen and illustrated by Stasia Burrington is a beautiful picture book inspired by the life of the first African American woman to travel into space, Mae Jemison. 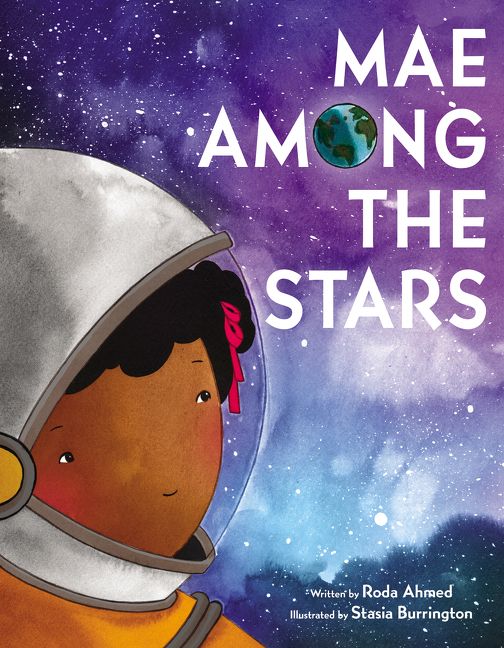 When Little Mae was a child, she dreamed of dancing in space. She imagined herself surrounded by billions of stars, floating, gliding, and discovering.

She wanted to be an astronaut.

Her mom told her, "If you believe it, and work hard for it, anything is possible.?

Little Mae's curiosity, intelligence, and determination, matched with her parents' encouraging words, paved the way for her incredible success at NASA as the first African American woman to travel in space.

Roda Ahmed is a Norwegian author and columnist born in Hargeisa, Somalia. Roda is the bestselling author of Forberedelsen (The Preparations). Mae Among the Stars is her first children's book. She can speak five languages: Somali, Arabic, Norwegian, English, and French. Roda lives in LA with her husband and two children.

Stasia Burrington is a Japanese-American illustrator and fine artist who makes her home in SeaTac, Washington, with her partner and two cats. She loves experimental cooking, camping, and everything having to do with science and science fiction.

As a girl Mae learns that not everyone believes she will achieve her dream of becoming an astronaut someday but her parents remind her to continue to believe in herself and to work hard anyway. In the back of the book you can read additional information on Mae and one interesting factoid is that she was the first real astronaut to act in an episode of Star Trek: The Next Generation! This book will inspire children of all ages and genders to reach for the stars and that their dreams can come true too! This would make an especially great book to read to a preschool class!