Kion Unwittingly Summons the Pride Lands’ Greatest Villain and Threatens the Circle of Life in THE LION GUARD: THE RISE OF SCAR now on Disney DVD. It includes five episodes of Disney’s ?The Lion Guard? featuring the voice of David Oyelowo (?Queen of Katwe?) as Scar.

Be prepared for the Rise of Scar!? With the arrival of the Dry Season, tensions run high, patience wears thin and thirsty tempers flare.? To make matters worse, Janja’s hyenas, aided by Ushari the snake, discover a secret that could bring back the vengeful spirit of the legendary villain, Scar! 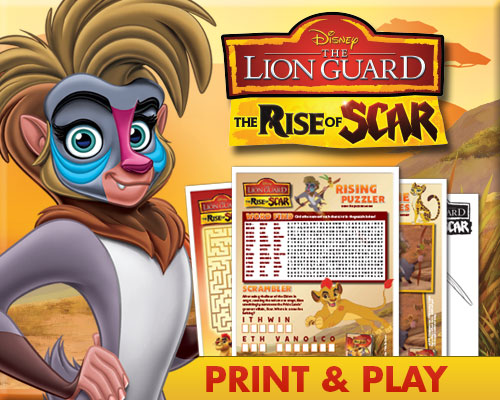 The Lion King was my all time favorite Disney movie when I was little so I love that the story continues in The Lion Guard. It is a fun show that we can all watch as a family. In this DVD the return of Scar is a fun change by merging my love of the original movie with the show of today. Kion is a great leader for his pack of friends but he always needs their help along the way. The 5 episodes on this DVD are especially entertaining as we see Scar in one and baboons in another which are a big hit with my girls. A fun show and we never miss a new episode.

Previous Post: « How We’re Making More Time for Family Fun PLUS Giveaway
Next Post: Strictly Briks Offers Up The Easiest Way to Display Your LEGO Creations »