You are here: Home / Movies / Mariah Carey’s All I Want for Christmas is You! Movie Comes Out TODAY
“As an Amazon Associate, I earn from qualifying purchases.”
Tweet
Pin
Share
Share
0 Shares

The new family holiday classic Mariah Carey's All I Want for Christmas is You is debuting on Blu-ray, DVD, Digital and On Demand TODAY from Universal 1440 Entertainment, a production entity of Universal Pictures Home Entertainment. Narrated and executive produced by Mariah Carey, the animated family film follows little Mariah as she chases her dream of having a puppy of her very own, making her ultimate wish for Christmas come true.

When Little Mariah sees a darling little puppy named Princess at the pet store, she suddenly knows exactly what she wants for Christmas. Before her Christmas wish can come true, she must prove that she can dog-sit her uncle's dog, Jack, a scraggly rascal; in fact, the worst dog in the county! Jack turns Mariah and her family's perfect holiday preparations upside down in hilarious ways. It wasn?t exactly the Christmas she wished for?it was more than she ever wanted. Based on the iconic Christmas song and popular illustrated book of the same name, Mariah Carey's All I Want for Christmas is You featuring Mariah's music and narration will be a family favorite for years to come.

Showcasing stunning visuals in beautifully realized CGI animation, the film showcases songs from Mariah Carey's immense discography including the iconic song All I Want for Christmas is You, along with two more of the pop queen's holiday classics Miss You Most (At Christmas Time) and Christmas Time Is In The Air.

Originally released in 1994, the single ?All I Want for Christmas is You? has sold more than 14 million copies. In 2016, more than two decades later, it was the year's most streamed holiday single and dominated at #1 on Billboard's Holiday 100 for four consecutive weeks . Carey's critically acclaimed picture book of the same name was published in 2015.

Mariah Carey's All I Want for Christmas is You is executive produced by Mariah Carey and Stella Bulochnikov for Magic Carpet Productions (A Christmas Melody, ?Mariah's World?) in partnership with producer Mike Young and Splash Entertainment (?Kulipari,? ?Norm of the North?). It is directed by Guy Vasilovich (Lego Star Wars) from a script by Temple Mathews (Return To Neverland, The Little Mermaid 2: Return to the Sea). 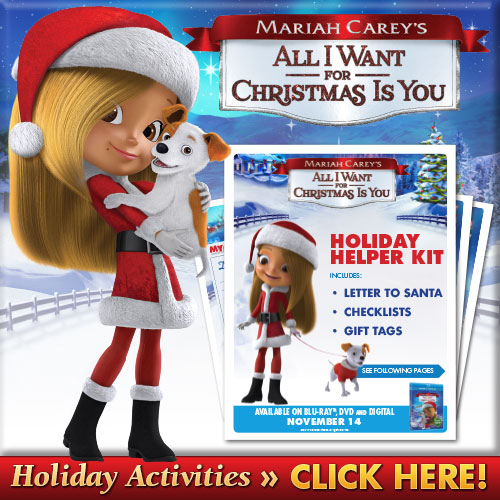 Christmas is a magical time of the year and my husband and girls really get into the holiday season. To start we break out the Christmas books and movies. It sets the tone for the whole season! This year we have added Mariah Carey's All I Want for Christmas is You into our DVD rotation and my girls LOVE IT! Mariah has been asking for a dog for forever but her dad is allergic so thus no dog. This year she feels things will be different. She has her eyes set on a dog named Princess who is a hypoallergenic dog. She does everything she can to prove to her parents that she can take care of a dog including pet sitting her uncle's crazy canine. Full of Christmas music and fun Mariah's wish doesn't exactly come true the way she wanted but she does end up having the best Christmas ever! This is definitely a movie my girls will want to watch year after year...and will make them want to ask for a dog too!