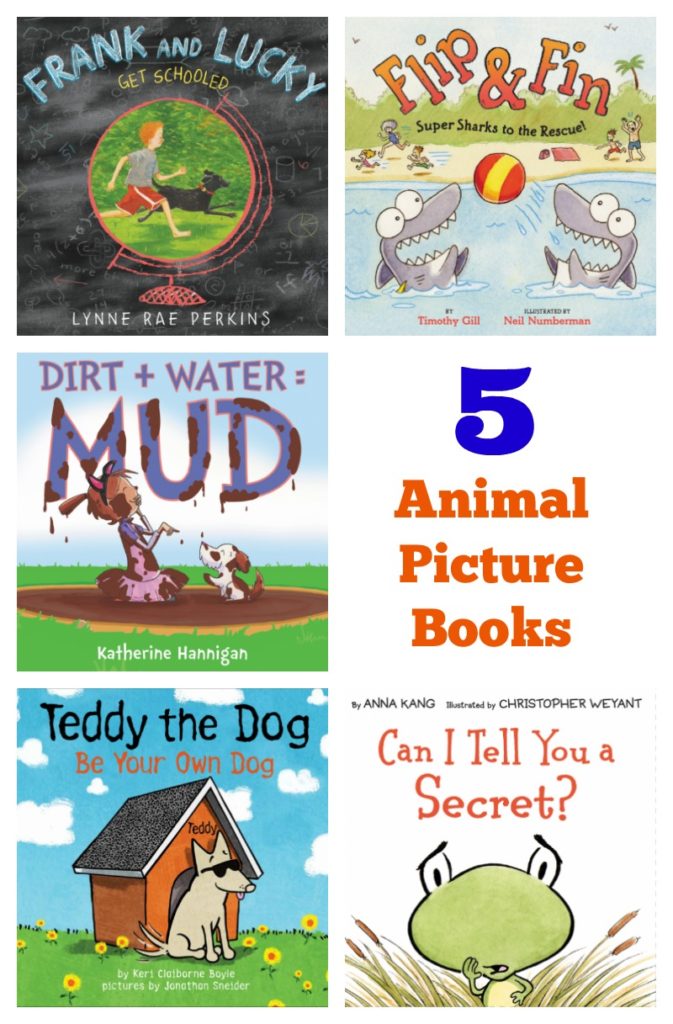 Frank and Lucky Get Schooled written and illustrated by Lynne Rae Perkins for ages 4 to 8. On a rainy day, Frank's parents take him to the shelter to get a new dog. That's how Frank finds Lucky, and from that moment on they?re inseparable. Not only do they have a lot to teach each other?as they explore the world around them they discover they both have a lot to learn.

Flip & Finn written by Timothy Gill and illustrated by Neil Numberman for ages 4 to 8. Faster than a sailfish! Tougher than a clamshell! Inspired by their favorite TV characters, Flip and Fin are determined to save someone's day. But whose? They swim right to the shoreline with their two best friends, ready to find someone in peril. And when they get there . . . Aaaaaah! Shaaaaark! What could all the people on the beach be afraid of? It's a job for the super sharks!

Dirt + Water = Mud by Katherine Hannigan and illustrated by Katherine Hannigan for ages 4 to 8. A young girl and her dog spend the day playing in her backyard, where with her imagination?and a few helpful props?anything can happen. What do you get when you combine dirt and water? Mud! What do you get when you take a sheet, a flowerpot, and a stick and make a costume? You transform yourself into Her Majesty, the queen! A cape and a strong breeze turn the treehouse into an airplane. A sheet, a stick, and a pair of well-placed cat's ears turn the girl into a pirate! At least until mutiny leaves her alone in her kiddie pool . . . surrounded by sharks!

Teddy the Dog: Be Your Own Dog by Keri Claiborne Boyle and illustrated by Jonathan Sneider for ages 4 to 8. Teddy the dog is living a dog's life. He's the leader of the pack and having fun just being his own dog. But when a mysterious package shows up, it's a CATastrophe! Or is it? Maybe a surprising addition to the family isn?t so bad. Maybe it's not just a dog's life after all.

Can I Tell You a Secret? by Anna Kang and illustrated by Christopher Weyant for ages 4 to 8. From the author-illustrator team of You Are (Not) Small, winner of the 2015 Theodor Seuss Geisel Award, comes an adorable picture book featuring Monty. He's a little frog with a BIG secret that he's ready to share. Monty learns how to face his fears with some help from his new friend?YOU!

Each of these books has a fun animal character as a part of the story making each book a great summer read.