For those of you that might not know about Disney Junior's Miles From Tomorrowland it is the new animated space adventure series that follows the Callisto family who live on a spaceship called the Stellosphere and work for the Tomorrowland Transit Authority. I have always had a fascination for space and I a happy to report my almost 4 year old might too because she really LOVES this show. This DVD is fun for the whole family! 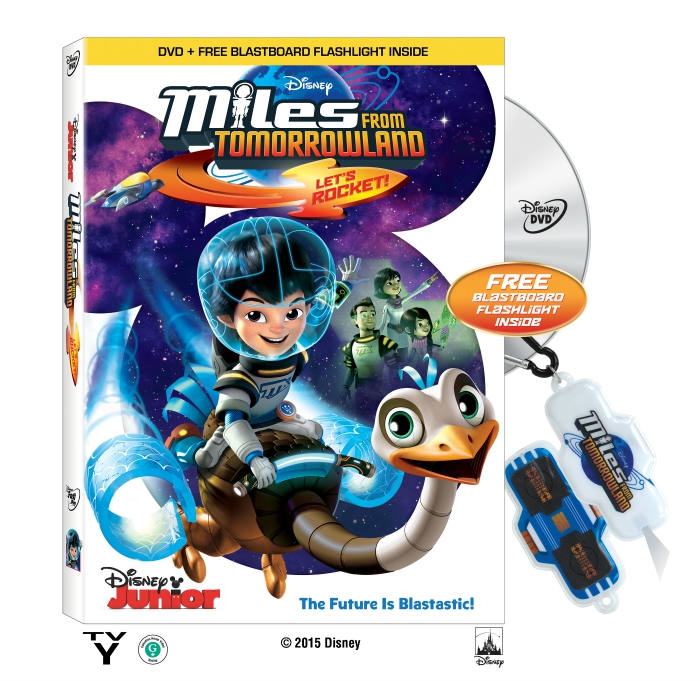 Disney Junior's "Miles from Tomorrowland" is an intergalactic adventure that charts the outer space missions of young adventurer Miles Callisto and his family ? mom and ship captain, Phoebe; mechanical engineer dad, Leo; tech-savvy big sister, Loretta; and best friend robo-ostrich pet, Merc ? as they help connect the galaxy on behalf of the Tomorrowland Transit Authority. Miles, Merc and the Callisto family explore wondrous and diverse new worlds, taking young viewers and their families on a futuristic journey designed to fuel kids' natural interest in space, and at the same time reminding them of the importance of what lies close to home ? the family bond.

Join Miles, his family and his best friend and pet Merc on a super-galactic adventure! This value-packed DVD includes the premiere episode plus 4 additional episodes, nearly two hours of fun! Plus FREE inside every DVD is an exclusive Clip-on Blastboard Flashlight that you can?t get anywhere else!

I really enjoy watching the big sister, Loretta, that often times is exasperated by her little brother, Miles. I can certainly relate since I grew up with a little brother! The family pet, Merc, which is a robot-ostrich is also like Mile's best friend. The whole show is super cute and it makes me wish we had space travel like it! Buy your little space explorer ?Miles from Tomorrowland: Let's Rocket? on Disney DVD and maybe it will take their imaginations out of this world!

Connect: You can connect with Miles From Tomorrowland on Disney Junior at their website.