Now that Big Sis is getting older (only 6.5 but to her that is “older”) she wants me to start reading chapter books with her now and then. Her attention span is not novel worthy so I try and find some nice transition chapter books for her to read. I think of those as chapter books with black and white illustrations scattered throughout the book. Fart Squad by Seamus Pilger and illustrated by Stephen Gilpin definitely keeps her attention and is an all around funny book that we enjoy reading together. 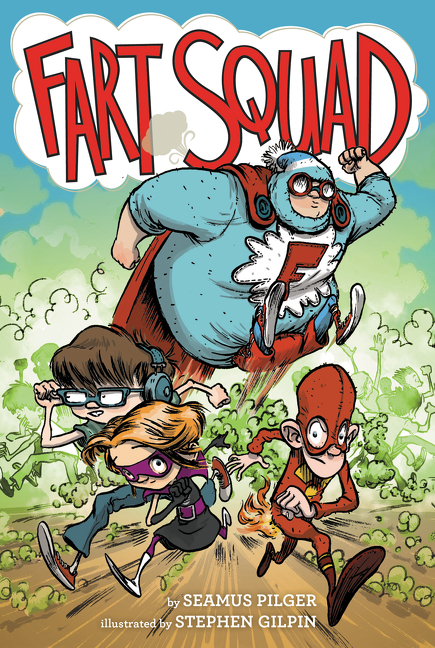 Standing up against bad guys (and downwind of everyone else), it’s the rancid, the rank, the got-more-gas-than-a-trucker’s-full-tank . . . the fearless fearless Fart Squad!

It was an average day at Harry Buttz Elementary until . . . . . . KABLAM! The five-bean burritos churning in Darren Stonkadopolis’s stomach ex-ploded in a fart so volcanic it melted his desk seat and landed him in the nurse’s office. That’s when Darren discovered he’s not the only one who smelt it and dealt it.

Something fishy is going on in Buttzville. And it’s up to Darren and his three farting friends to get to the bottom of this evil plot?before it’s too late. With their fates hanging in the balance (and their rotten biscuits floating in the air), the Fart Squad must learn to harness the powers between their butt cheeks to take charge, make a stand, and let it RIIIIP!

If repeating fart jokes are not funny to you then you will want to take a pass on this book. If you do enjoy gas jokes like my daughter and I do this book is most certainly the right read for you. Packed lunches have gone missing and that leaves the hungry only one option…the bean burrito in the school hot lunch. The problem is the burrito eaters soon suffer the smelliest farts imaginable. Some are silent and others will knock you off your feet. Meeting up in the nurse’s office, and thus knocking her unconscious from farting, the group forms the Fart Squad and they are going to use their new found power to discover who is behind the missing lunches.

This book is extremely funny and the cheesy jokes are non-stop. Big Sis could not believe such a book existed! It is directed for the 6 to 10 aged crowd and would be especially great for boys and reluctant readers. Books don’t always have to be sunshine and rainbows…sometimes they can be kids with farts so bad that they set their own pants on fire!