My son’s birthday was this past weekend and he had a few friends over to play video games, watch movies and spend the night. Since he turned 13, kiddy themed ideas were out of the question, but I still wanted to make it special for him. Then I thought, why not a movie theme! Since they were after all, watching movies, it made perfect sense.

I had some really great ideas, then of course found more on Pinterest. So I started shopping, crafting and getting everything ready for a perfect movie theme. Today I’m here to share all of my movie night themed party ideas and the best past is, each and every idea is very friendly on the budget! 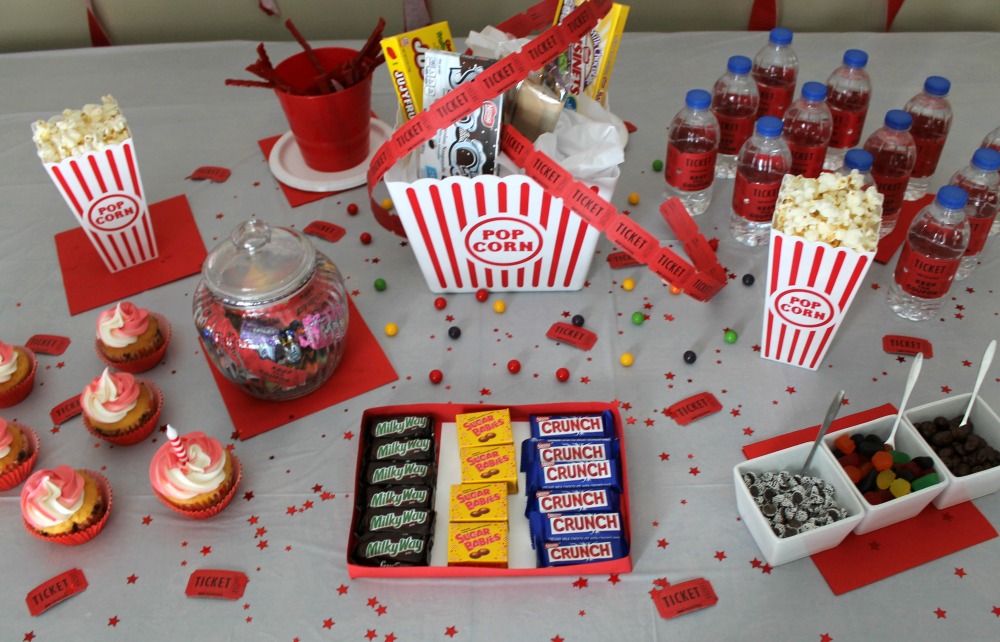 You can grab the candy, popcorn containers, popcorn, red pails and streamers from the dollar store. They sell the traditional boxed candy that you generally find at the movie theater, then the candy bars come in 6 packs. I picked up the rest of the things at Walmart, like the mini water bottles, plates, napkins, red star confetti and cupcake supplies. I already had the tickets, but those can be purchased there as well, in the office supply section. 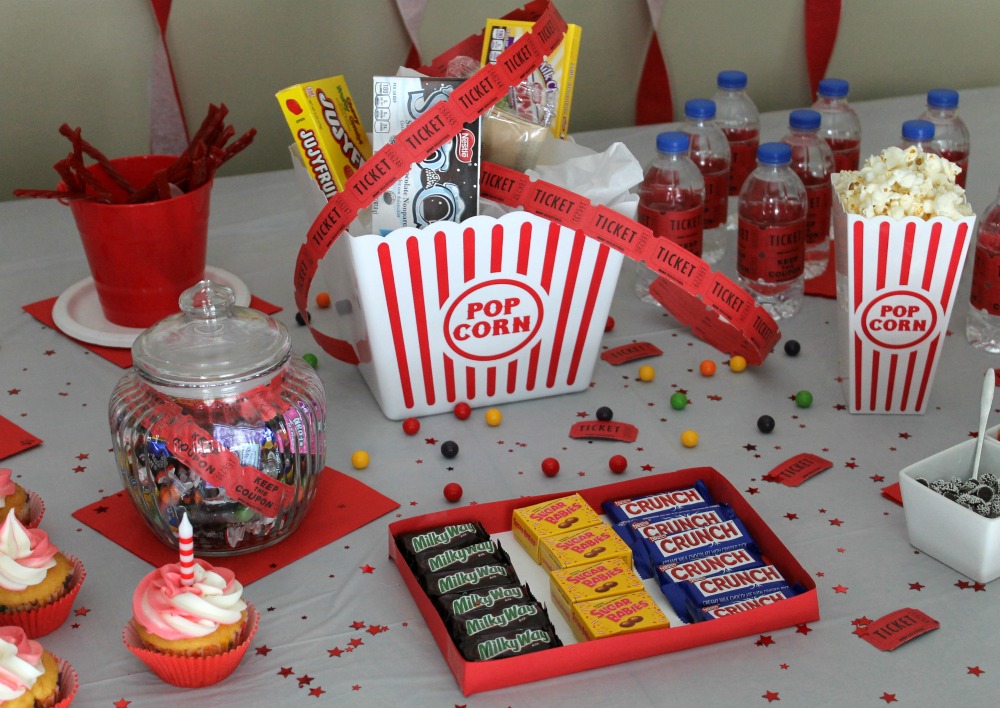 You’ll want to do your decorative wall before you start putting the rest of the table together. Using red and white streamers, line each color up back to back and tape the end. Then roll them both out at the same time and cut to your desired length. Secure the taped end to the top of the wall using another piece of tape, continuing to hold each color against the other. Turn in a clockwise motion until it’s twisted until the end. Cut to same length and apply another piece of tape to secure the two pieces together and tape to the bottom of the wall. Repeat this until you have 6 lines of streamers going down the wall.

Using one piece of red card stock and a paper trimmer, cut 10 – 3×2 inch pieces and write out MOVIE NIGHT. Next you’ll attach each letter with a craft glue stick to the front of 10 small white party plates. Attach a piece of tape to the back of each, making the tape double sided and secure to the wall, spelling out MOVIE on the top and NIGHT on the bottom. 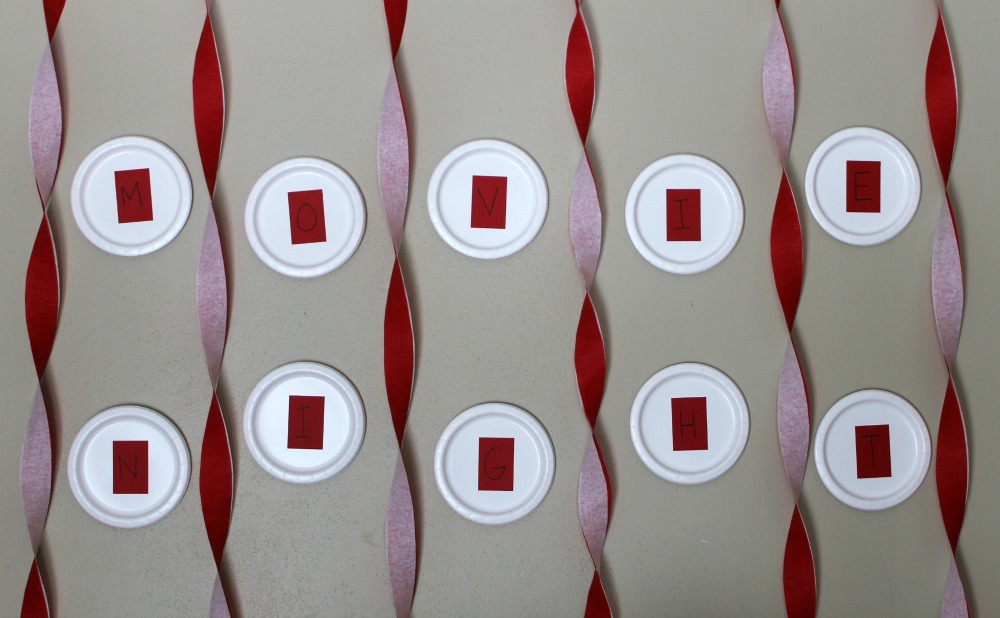 For the centerpiece, I used the large popcorn bucket and filled it with crinkled tissue paper. Then I placed the candy boxes and some popcorn inside and used another crinkled sheet of tissue paper to keep them in place. I took a strand of about 25-30 tickets, ripped off the “Ticket” portion and arranged them around and through the movie bucket. Super simple and I’ll even let you in on a little secret; since this was just being used as the centerpiece, the candy boxes are empty! 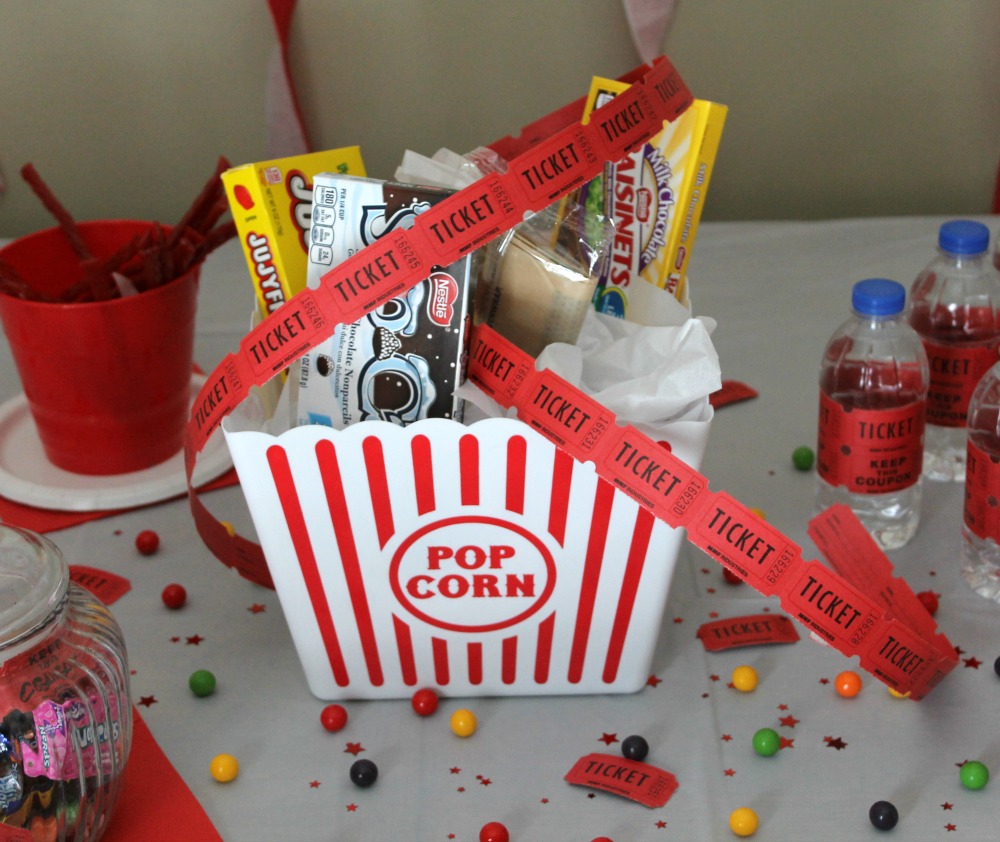 I poured the contents of each candy box into small white dishes, placed a spoon in each and laid them out in a straight line on top of a red napkin. 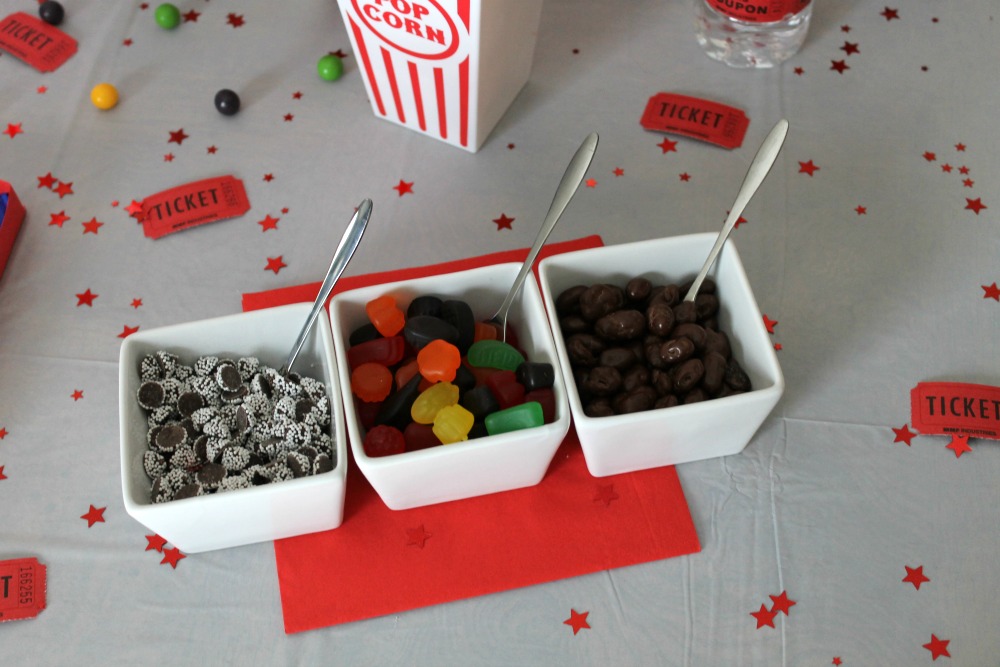 I wanted the whole candy counter effect, so I took a sheet of red card stock and made a diagonal slice about 3/4 of an inch up on each corner of the paper, then folded each side up, securing it with a piece of tape. I then cut 4 – 1 inch strips of white card stock, the length of the makeshift tray and secured them using a craft glue stick, placing them 1 inch apart.  Super easy and it literally costs just pennies! 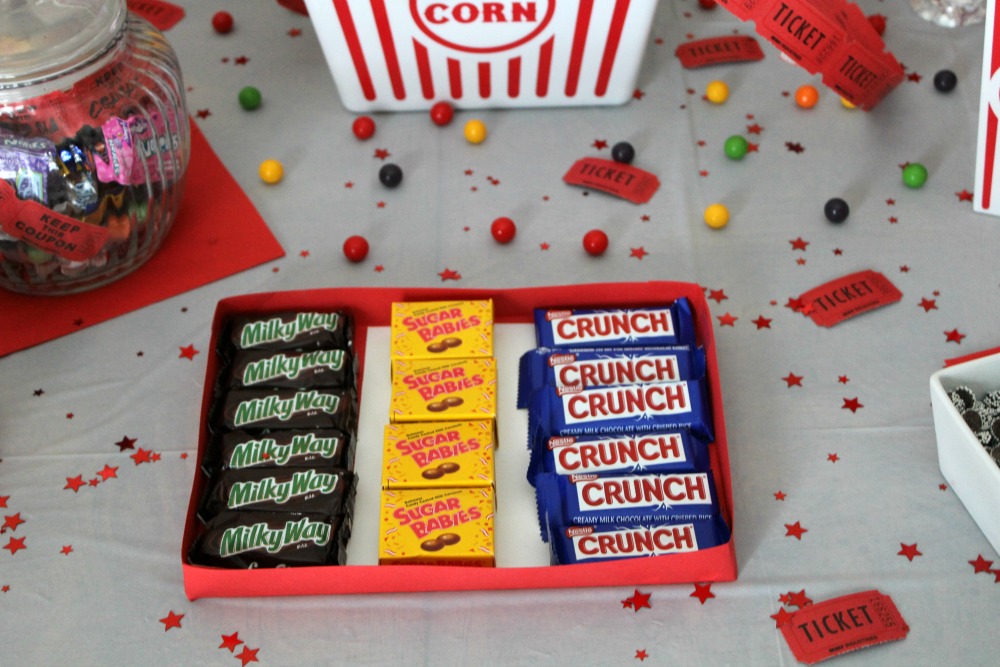 Any leftover candy can be placed in a glass jar with a roll of tickets, then placed on a red napkin. Licorice ropes make a nice “red carpet rope” and can be placed into a red bucket which will then sit on a white plate on top of a red napkin. I do wish I’d have done a strip of white around the bucket though, so you might consider that for your movie night! 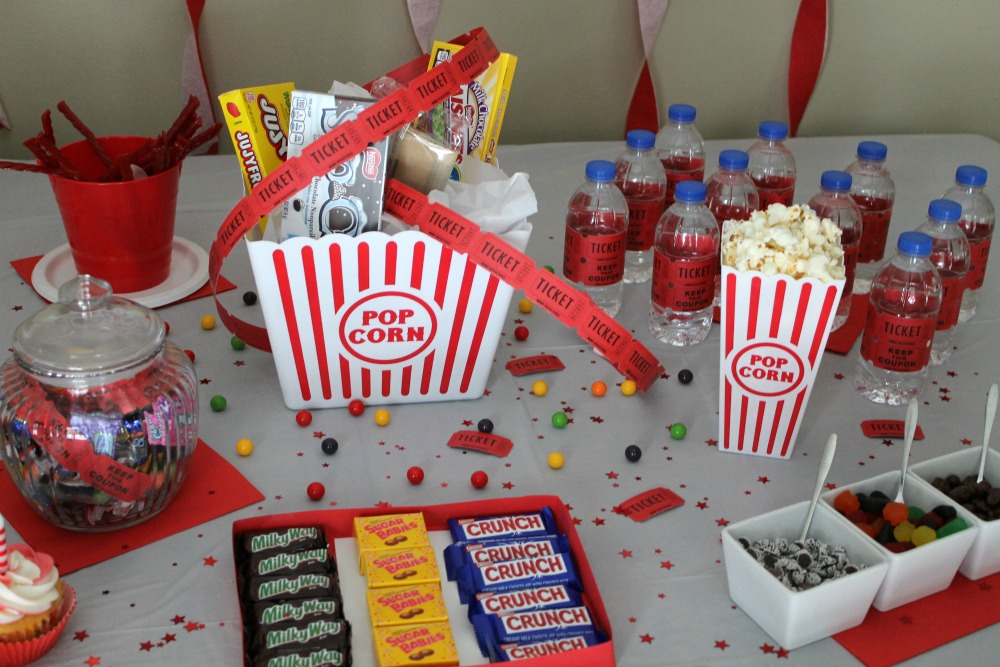 The movie ticket water bottles were so easy to make. I simply removed the labels, then took a strip of 4 tickets, wrapped them around where the label was and secured with tape. This project is a good one for the kids to do while you’re prepping the rest! 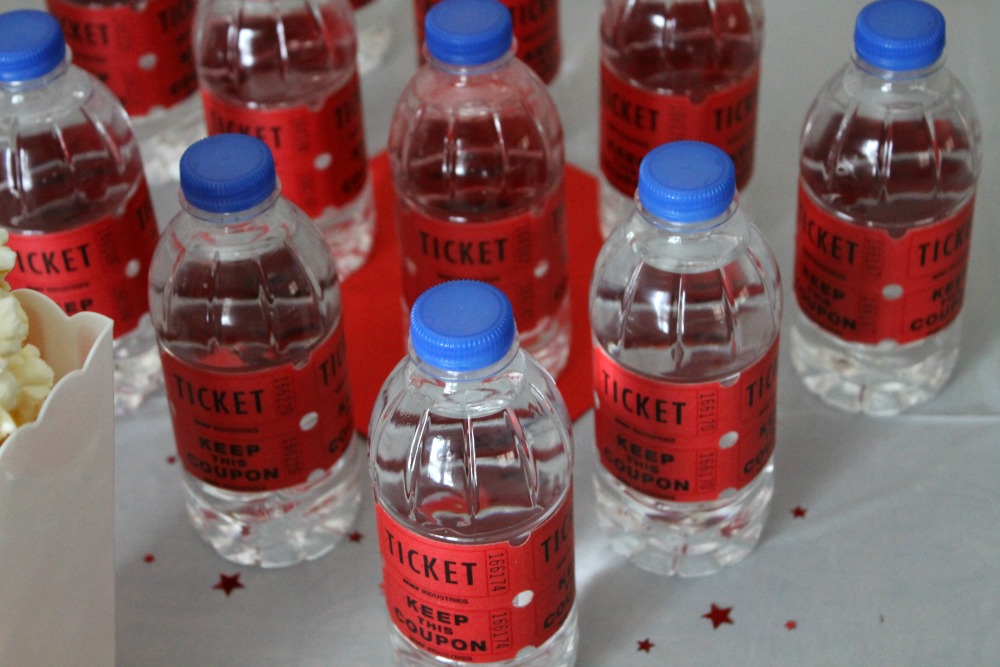 I’m one of those people who always makes homemade cupcakes for parties because it’s so much cheaper and they taste just as great. I used a basic yellow cake mix and can of vanilla frosting for these, but feel free to use your favorite recipe. After you’ve baked and cooled the cupcakes, place them in a red liner to match the theme.

Divide the frosting in half and mix one half of the frosting with red food coloring. Grab a large star tip, place it into a piping bag (or I use zipper bags since they’re cheaper) and spoon the white into a layer on the bottom, then spoon the red on top. Refrigerate about 10-15 minutes to stiffen just a bit, then squeeze the frosting to the tip. Pipe some of the frosting onto a napkin until both colors run through. Then start piping onto the cupcakes. The technique is easy and if you’re unsure how, check out some piping tutorials on YouTube; that’s how I learned! 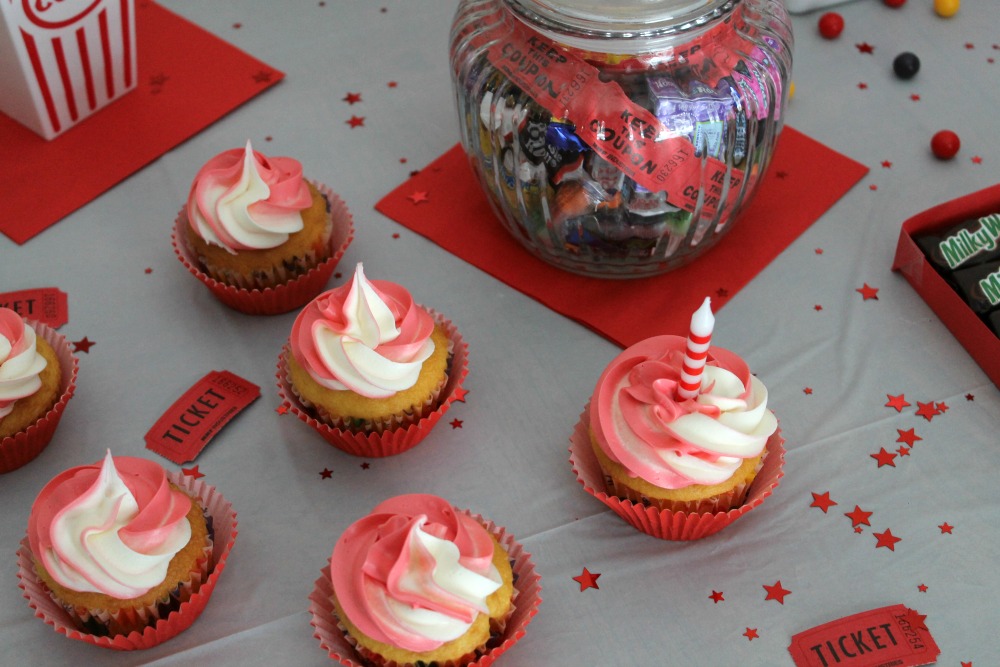 You’ll fill the small popcorn containers next and place them around the table as desired. You can put these on top of a red napkin too, which you’ll notice I forgot to do with this one – oops! 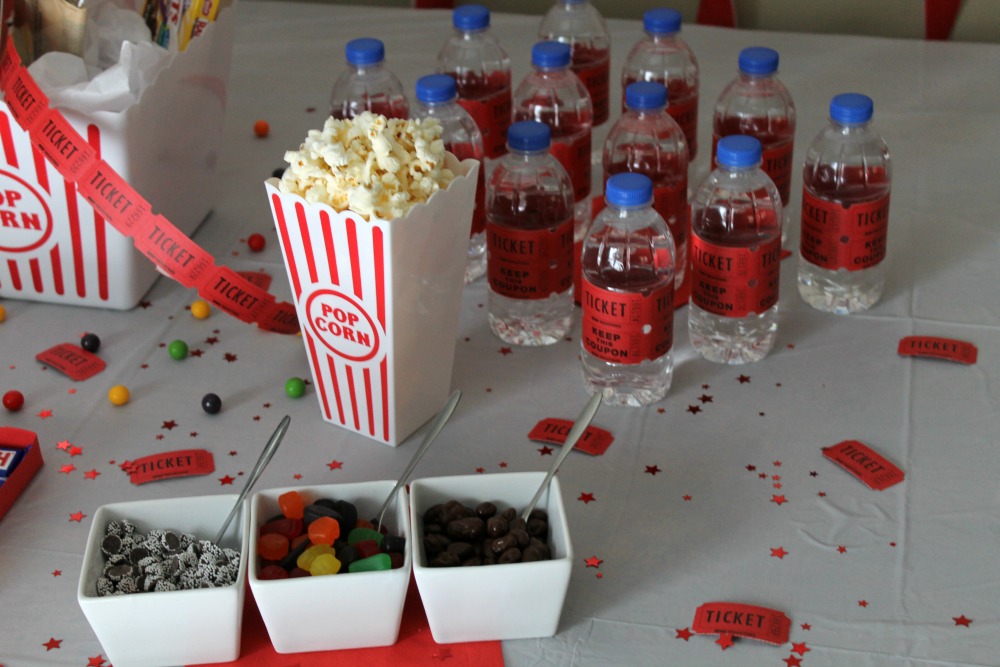 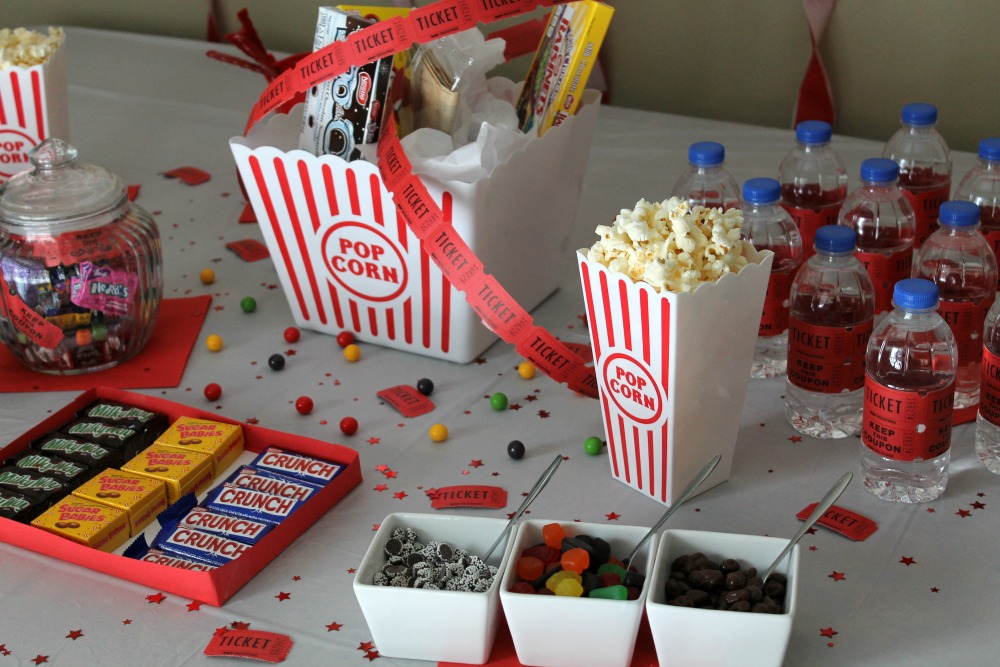 There you have it, a fun themed movie night for a party or even just a little added fun to family movie night. I think I spent around $25 for everything, so this really is a budget friendly theme!

Which of these party ideas is your favorite?