~I received a copy of Butterfly Stitching by Shermin Nahid Kruse for review. Opinions and stories are my own.~

One of the best books that has been released this summer is Butterfly Stitching by Shermin Nahid Kruse. In her debut novel she shares the empowering lives inspired by the true stories of Iranian women, including her own and her family’s, and offers you a look into a world that has long been in the shadows. 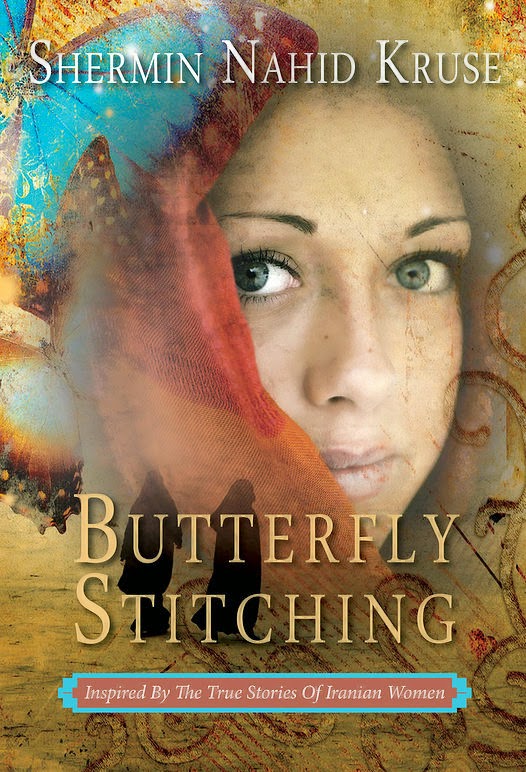 It is told from both the perspective of the mother and daughter from different points in time; both of which are rooted in significant revolutions. For many of us it is a world we could scarcely imagine. Shermin Nahid Kruse shares the lightheartedness and love of simple family life with school, grocery shopping and conversations over dinner. What moments would seem simple and mundane become powerful and utterly poignant when set against the backdrop of curfews, random bombing, secret police and public execution.

And the horrors of war.

Butterfly Stitching weaves a stunning tapestry of the lives of Sahar and Samira, daughter and mother.

And through the strength, beauty and imagination of these remarkable women, reveals Iran herself.

What makes this story so achingly beautiful is the voices within it. The young girl whose tiny fist is in the air screaming for the fall of America while imagining what beautiful colors might be hidden behind the mandatory uniforms. The thoughtful mother that remembers what freedom was once in swirls of color, whose rebellion is found within her paintings, music and the education she bestows upon her children.

Butterfly Stitching, was inspired by the true experiences of herself and the women in her family and circle of friends. Through a stunning tapestry of the horrors of political oppression, a terrifying secret police, an inspiring forbidden love, and the realities of war, Butterfly Stitching weaves the tale of Sahar and Samira. Daughter and mother. And through the strength, beauty and imagination of these remarkable women, reveals Iran herself.

I fell in love with Sahar and Samira. Despite the enormity of difference in our worlds, motherhood and the desire for our children to be free is universal. I believe one of the most important truths that the story bestows is that being free is about having a choice and the acceptance of those choices. At one very significant point in the story they are given the freedom of not wearing the veil and yet Samira chose to wear hers. In this moment it shares how it is not the veil that represses women, but the refusal to allow women the choice to/or not to wear it and ultimately the acceptance of that choice.

We could all learn so much from that simple act.

There are parts in this story that will make you cry and want to reach through the pages; moments where you will feel as though you haven’t taken a breath for a whole chapter. Butterfly Stitching is one of the most incredible storytelling journey’s I’ve had the pleasure of being invited on in a long time and only hope that Kruse offers us another chance to step into the forbidden land and the heart of its people.

You can learn more about Butterfly Stitching by Shermin Nahid Kruse by visiting the webpage. I highly suggest taking the time to Like this amazing novelist on Facebook.

Previous Post: « It’s Fun to be Sili with Silikids + Giveaway
Next Post: ChalkTalkSPORTS Is Your Gift Source For Sports »