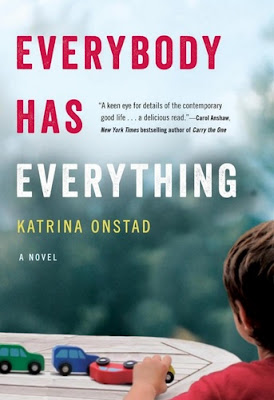 Sometimes you come across a book that is endued with so much life that it makes you feel as if you are peeking into a forbidden window, watching people in their private moments. The joy, pain, anger, lies, jealousy, sorrow and longing all become visible and stain the secret places in your heart where life (or love) had cracked you open. You can’t put down the book, nor turn away from that window, because the figures are so intense that you feel as if at any moment something is going to happen and you will miss it. You will miss them.

Everybody Has Everything is that book.

I was drawn into reviewing Katrina Onstad’s novel because the context seemed intriguing and pretty unique. A couple that had been trying for years to have children, had been through all the agonizing tests and financial strain eventually wound up with the absolute – no. Then one day, on the day the book opens, they are thrown from their individual lives into that of having a trusted guardianship of a 2 year old boy. The horrid circumstances of how this comes about plays like a shadow as they move from one day to the next, holding onto who they were with wispy fingers and as one becomes sewn into the fabric of the little boys life, the other begins to let go.

There are so many pieces to this novel. It expresses eloquently the emotions and stress of growing older and having to come to terms with it. The feeling of having duel worlds, whether inside yourself or somewhere as simple as the playground. The roles of sexes in parenting, business and family matters; our feelings of inadequacy, how we cope with death and ultimately the role and nature of a Mother.

Although the novel is based around James and Ana and their relationship once an accident finds the 2 year old Finn in their laps, it also has a lot to do with the shadowed figure in the background (Finn’s Mother Sarah) as the opposite personality of Ana. You can visualize her reflecting the image of herself through Sarah’s eyes and back outward into the world. The way the novel is written with both James and Ana’s minds intertwining, loping through each other as they see the other and being a continuous stream from one part of the story to the next as if even their words were married, is beautiful. By the time you come to the end you will understand why it matters.

I can’t get into too much about the book without giving more away than I want to, but I will say that it will make your heart ache and you won’t be able to put it down once you break the binding of the first page. When you are finished, James and Ana will become as real figures in your life and you will worry with them, wonder with them and deeply understand even without having ever been in their shoes. Katrina Onstad is a phenomenal writer and this is not a book you want to pass up on the shelf.

You can find out more about Everybody Has Everything on the website.

Purchase: You can also pick up Everybody Has Everything by Katrina Onstad on Amazon for $10.99.