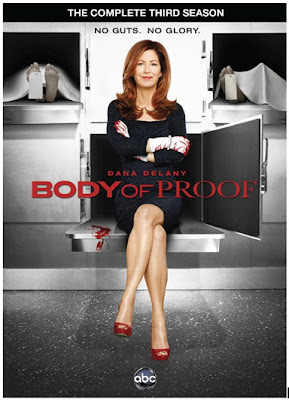 I love this show!  The tension between stars Dana Delany (Megan Hunt) and newcomer Mark Valley (Tommy Sullivan) is just awesome.  And I love how every episode is new and fresh and you can jump in any time.

In the third exciting season of ?Body of Proof? things are hotter than ever as new characters are introduced and relationships are tested when Medical Examiner Megan Hunt uncovers a new murder mystery every week! The three-disc DVD set brings fans deeper into the series with exclusive bonus features including exclusive featurettes, bloopers and more!

?Body of Proof? stars Dana
Delany as Megan Hunt, Jeri Ryan as Kate Murphy, Mark Valley
as Tommy Sullivan, Geoffrey Arend as Ethan Gross, Windell
Middlebrooks as Curtis Brumfield, Elyes Gabel as Adam Lucas and Mary Mouser as Lacey Fleming.
This 3-Disc DVD comes with all kinds of bonus features:
Getting The Shot ? Fans will join the
series? Director of Photography and Cinematographer to get an insightful
first-hand look at how the visual
tones of the production are created.

VFX The Ultimate
Makeover ? Filmed in Southern California, but made to look as if it’s set
in Philadelphia, visual effects play a large role in the
making of ?Body of Proof.?  In this striking featurette, the cast and
visual effects artists walk viewers through what it
takes to create the transformation.

All Kinds Of Props ? The cast and crew
illustrate the importance of props within the development of each fascinating episode.

Creating The World ? The executive
producers take fans onto the set of ?Body of Proof? to provide an inside look
the show’s world, and share
how the Walt Disney Studios lot is transformed into the streets of
Philadelphia.

Body of Goofs ? A look at some of the
hilarious behind-the-scenes moments from the set of ?Body of Proof.?

So go get your copy today!