You ever wonder what goes on at home while you’re not there? Do you wonder what the kids {and their friends} are up to when they think you aren’t looking? Well then you’ll want to check out this review!

“It’s impossible to predict when something important will happen. Dropcam HD keeps an eye on the scene to detect and alert you of events. Intelligent Dropcam HD event detection software tracks movements and sounds and alerts you in real-time to what it finds.Receive email or mobile alerts to your iPhone or Android when your wireless camera detects motion or audio. Just turn motion and audio detection on, and Dropcam HD automatically alerts you. Dropcam is peace of mind while you’re away.” 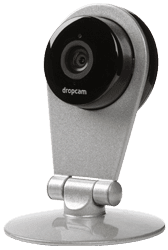 Having 3 dogs, we sometimes come home to a mess. One {or all!} of them will get into the garbage, make a mess or get on the furniture while we’re away. Sometimes we pull up and can hear them barking or howling. I’m sure our neighbors just love that! So when I was contacted to test the Dropcam HD, the hubby and I agreed that we would love to try it! 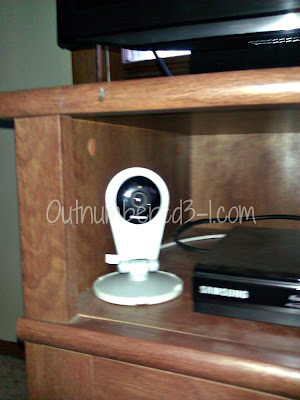 The Man was all excited when the Dropcam HD arrived and tore into the box before I could even take a look. He set it up right away, turned it on, then went to this computer so he could check it out in action.

It was awesome, we had live feed right from our living room. We sent Lil Man in there to grab something, then said something to him and he jumped a little bit from being startled. It was pretty funny! This is a perfect feature for when we’re away though, because we can say something when we see the dogs doing something wrong.

It really came in handy while we were on vacation last month. The Man would check in on the house right from the laptop. Of course, nothing goes wrong when you’re expecting it though!

That’s why the DVR feature is great. There are 3 different plans to choose from, one being free. However, the free plan does not include the DVR feature so you can only watch live feed. The Dropcam does come with a 14 day free trial though. 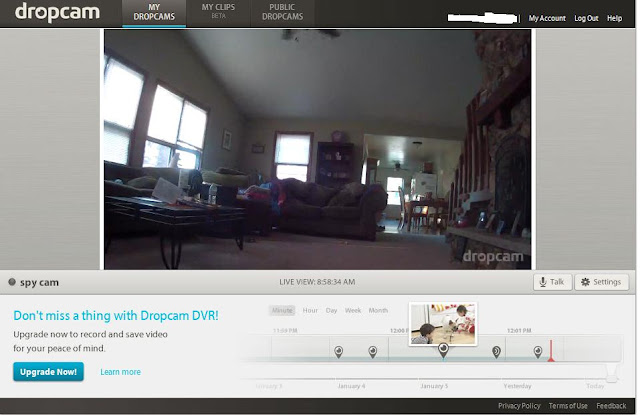 Here’s a still image of the live feed coming from my living room as I write this review. Don’t mind the mess, it’s morning and I got straight to work, before cleaning up! As you can see from where the Dropcam is positioned, you can see almost the entire living room, into the dining room and kitchen.

The Man and I both agree that the Dropcam is an amazing little piece of technology. There are plenty of times that I have wondered what’s going on when I’m not home, or what a certain sneaky little someone is doing inside while the rest of our guests are outside. Well now with the Dropcam I can have peace of mind when at home and away from home.

You can access your Dropcam account from your computer, your iPhone, iPad, iPod Touch, Android phone, and even your Kindle Fire tablet. I have a Windows phone and tried it there, but it’s not available. I’m hoping they’ll make the app soon though!

The Giveaway: How would you like to win your own Dropcam HD? I have one to give away to one lucky contestant!

To enter the giveaway please follow all of the directions below! If you don’t follow the rules, you can’t win!