BOBS BURGERS? follows a third-generation restaurateur, Bob Belcher who runs Bob’s Burgers with the help of his wife and their three kids. Despite his greasy counters, lousy location and occasionally spotty service, Bob is convinced his burgers speak for themselves.

The #1 Animated Premiere of Bob’s Burgers aired on Fox last January to wonderful reviews from Entertainment Weekly and CNN. Having some elements shared with other Fox shows, like American Dad and The Simpsons, the opening sequence is never the same and changes. Since I was a teenager, I’ve always loved how Fox animated shows opened up this way because you never knew what it was going to be! Just as Bart always writes something different on the Blackboard at the end of the The Simpsons, Bob’s Burgers always has a new Burger Special on their Menu; also the store tends to change, as well as the Grand Opening sign, amongst other things. 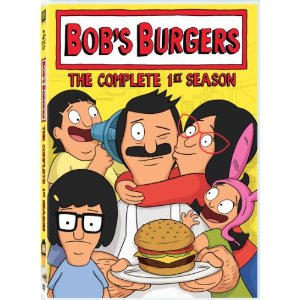 First off, it was really nice to be able to watch a show that isn’t tied into other shows on Fox (like most of the animated shows are tied to Family Guy). Bob’s Burgers is completely new and with it brings a refreshing uptake on comedy. It is also unique in the fact that you are slowly introduced to the town as you meet it. All of the episodes center around Bob’s Burgers and then the neighborhood around them is slowly discovered as new plot points are added in. This is really neat, especially for those of us that love to start things off fresh so we can follow along easier! It has a very real feel to it because of this, and I liked that a lot.

This is a very quirky animated comedy. The Belcher family is made up of a mix of amusing characters.

Bob Belcher is a third-generation burgermeister whose restaurant is constantly on the verge of going out of business due to his late rent payments. He tries to keep the place going with the help of his three kids and loving wife Linda, but he’s constantly on edge because of the success of his arch nemesis, Jimmy Pesto, whose pasta joint always seems to draw bigger crowds.

“Linda Belcher is the co-owner of the family restaurant and is the perpetually perky mom in charge. She’s always on the lookout for a surprise birthday party or unexpected anniversary present, and her faith in Bob is unwavering.”

“Louise is the youngest and most spirited of the Belcher kids, though her idea of helping out her dad’s business sometimes includes telling people that he makes his special patties out of human remains. She’s instantly recognizable by the pink bunny ears she always wears.”

“Gene is the middle Belcher child, and though he loves wearing his burger mascot costume, he sometimes gets so excited that he forgets to take it off to go to the restroom. He loves his fart machine, megaphone, and tiny keyboards, and he’s always willing to provide a flatulent soundtrack to the family’s adventures.”

“Tina is the Belcher family’s “first pancake,” in that the 13-year-old high schooler is a bundle of nerves and neuroses and not nearly as self-confident as her more freewheeling siblings. She’s clumsy, gets rashes, has stage fright, wears chafe-y bras, has night terrors, and is obsessed with getting to first base.”

You can read the full Character Bios on Fox Broadcasting Company website. Also, here is the original Sneak Peek of the show before it aired last January!

One of the nice things about this show, although it still has the quirky comedy of all Fox animated comedies, is that the family actually does love each other. They stick together despite everyone’s awkwardness and they support each other even when things are obviously drab or crazy. That’s a welcome respite from where other shows have made families turn on each other for laughs and one of the things that really made me love this show. Make sure to pick up Bob’s Burgers The Complete 1st Season and watch from where it all started!

Purchase: You can purchase Bob’s Burgers The Complete 1st Season for $21.99 on Amazon.