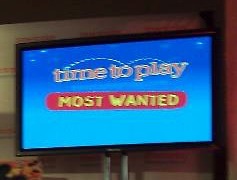 I had the most amazing opportunity that I have had so far in my blogging career. I had the pleasure of attending the Time to Play Holiday Showcase in New York City on Tuesday! It was an awesome event and I got to check out some super cool toys; many of which are on my holiday list for my own kids now!

Some of the highlights from the event were meeting with the wonderful team at Litzky PR, who handled the event {Kaylie is just the sweetest thing!}. I also got to meet the amazing team from TimetoPlayMag.com and a bunch of PR reps that I’ve worked with and even more that I haven’t. Meeting Stephanie from Spin Master was awesome, because I’ve worked with her quite a few times over the last year. She is as awesome in person, as she is online!

I had an amazing dinner and was able to hang out with Felicia from Go Graham Go, Ellen from Thrifty and Chic Mom and a handful of other bloggers. The highlight {or not!} of my trip was being stuck at the airport for what seemed an eternity with Robyn from Robyn’s Online World, Louise from MomStart and Chris from Dad of Divas. Despite the disappointment of not leaving on time, I think we all had a great time together. I couldn’t have asked to be stuck in an overly crowded airport with better company!

So now, without further ado, I’ll let you all in on the Time to Play’s 2011 Holiday Most Wanted List {in alphabetical order}! 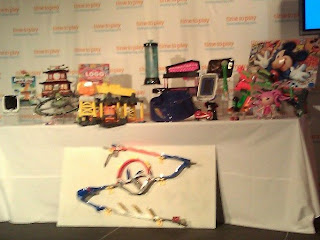 I’m sure you’re wondering which ones are my favorite, aren’t you?!? My opinion may be a little biased since I only have boys and don’t know a whole lot about all of the girl’s toys out there. Perhaps the fact that I played with a lot of boy toys when I was young plays a tiny factor too though!

The following toys from the Time to Play’s 2011 Holiday Most Wanted List are on my “to buy list” for my boys this holiday season! 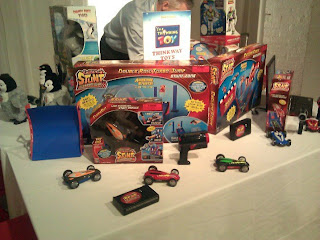 DaGeDar – These toys are just so much fun! We definitely have to get some tracks and watch these little suckers go because they are a ton of fun!

FyrFlyz -These are the hottest thing since the yo-yos we all had as kids, but so much better! They are a blast and I was lucky enough to bring one home to my kids. Now we just need a few more because everyone in the house loves them!

Hot Wheels Wall Tracks -The greatest invention since Hot Wheels, these tracks don’t have to clutter your house, just a nice empty wall!

InnoTab – Perfect for Lil Man to want to learn. He won’t even know he’s learning while playing, genius idea!

Lazer Stunt Chaser Dragon Fire -This one is definitely in my top 10! If you have all of the ramps and cyclone, this little thing is amazing in action! I’ll be fighting the kids over this one for sure!

LeapPad Explorer – Right there with the other tablet, this is sure to stimulate my son’s learning abilities!

LEGO – Anything from LEGO rocks in my book!

The Logo Board Game -A perfect game for a bunch of bloggers to play together! How well do we know our brands?!

Nerf Vortex – Nerf guns, bullets ad footballs are all around this house. This disk shooter is the hottest new addition and shoots amazingly far!

Make sure to stop back during the next few weeks as I highlight even more toys from the event! I was able to bring a whole bunch of toys back that my family just swooned over!

*Please excuse the image quality. My camera decided to disfunction and  I had to use my phone for all photos!

A huge thank you goes out to TimetoPlayMag.com and Litzky PR for inviting me to this event! I received samples of some of these toys and an all inclusive trip to this event. Opinions expressed are my own or my families and are not influenced by any form of compensation. Take it or leave it. Click here to view my full acknowledgment policy.