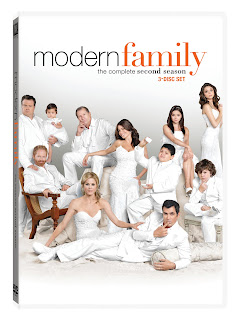 Packed with tons of exclusive features and never-before-seen footage, Modern Family: The Complete Second Season Blu-ray and DVD will satisfy even the most diehard fans.  Each set includes all 24 episodes of the critically acclaimed hit plus deleted family interviews, extended and deleted scenes, a hilarious gag reel, a music video and much more.  The ARP for Blu-ray is $49.99 and DVD is $39.99 respectively.

The Pritchett clan has Jay sitting at the head, a true guys’ guy experiencing a bit of mid-life crisis, has remarried a much younger wife, Gloria, whose passion and loyalty is matched by her 11-year-old son, Manny, a boy wise beyond his years. Blending together into this new family has quite the learning curve with some culture clashes, a few awkward misunderstandings, and plenty of sweet victories along the way

Jay’s grown daughter, Claire, has her own family. Claire and Phil are the proud parents of three kids with whom they want that open, healthy, honest relationship. It’s not always easy, especially when you have a teenage daughter who’s growing up a little fast, a too-smart-for-her-own-good middle daughter and a scatterbrained boy. On top of that, Phil wants to be the “cool dad,” while Claire is just trying her best to run a tight ship, determined not to let her kids have the rebellious childhood she had.

Claire’s brother and Jay’s grown son, Mitchell, adopted a Vietnamese baby with his partner of five years, Cameron. Opposites attract in this household, with Cameron having a wonderfully big personality and maybe a flare for the dramatic, whereas Mitchell is the more serious of the two. They balance each other out and are doting fathers trying to do their best as new parents.

All of these three families are unique unto themselves, and together they give us an honest and often hilarious look into the sometimes warm, sometimes twisted embrace of the modern family.

The series is produced by Twentieth Century Fox Television in association with Levitan Lloyd Productions. Steven Levitan and Christopher Lloyd are executive producers/creators.

I have been a long time fan of Ed O’Neil and watched the entire first season of Modern Family. I thought it was absolutely hilarious and one of the best television shows I’d seen in a long time. I’m not much of a television person, so that’s really saying a lot!

I have been patiently awaiting the arrival of Modern Family: The Complete Second Season to DVD. That time is almost here, in fact just a couple of short weeks away! I am really looking forward to this season and you should be too!

This is strictly a giveaway. Opinions expressed are my own or my families and are not influenced by any form of compensation. Take it or leave it. Click here to view my full acknowledgment policy.