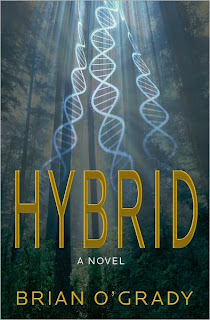 When first given this book to review I was skeptical. Dr. Brian O’Grady, a Washington neurosurgeon,  was trying to follow in the foot steps of the once great Michael Critchon, to whom I have been a devout fan of for years. Hybrid was to have the same spirit of suspense as The Andromeda Strain and the X-Files, a cross between a medical thriller and something more paranormal. As both the book and the show were intelligently amazing, Hybrid was starting to put itself on a pretty high pedestal I wasn’t sure it could live up to.

Readers, how wrong, how incredibly wrong I was! From the very beginning I was captured, reeled in with such realistically compulsive characters with depth that goes beyond a philosophical thought process, but complicated inner workings as though their psyche’s pulsed page by page. He wasn’t afraid to show the darker depths of humanity in both the heroic and villainous and his understanding of the complicated workings of the brain made them more structured than even some of Michael Critchon’s characters. You are not only emotionally drawn in to the story but intellectually stimulated by how things are possible, or could be possible, and often times I found myself stopping momentarily just to wonder about how my own brain worked; how my psyche was developed.

I was overwhelmed in my excitement to share with my friends (to whom also mourned the loss of THE great author of medical thrillers) that there was someone new on the horizon! An author coming from a different perspective and yet still being capable of filling you with a sense of dread as they create a “possible” horrific situation in your present time. Medical thrillers always leave me with a different sort of fear than the horror genre, it leaves me with the knowledge that it “could” happen. In this way I would have to say it also is in the spirit of Fringe.

The fact that the main character and I share a name also crept under my skin and at one point a character misinterprets her name, Amanda Flynn, as Amanda Lynn which is my name! And that just did me in.

“Seven years ago, everyone died in the Honduran camp from the EDH1 virus, but Red Cross worker Amanda Flynn. Airlifted home to America , medical professionals tried to identify why Amanda survived when others died gruesome, agonizing deaths or became violent savages. Little did they know that anyone who survived?changed.
Since her escape from quarantine, Amanda has been in hiding slowly realizing the powers that could have only come from her infection. She can sense things, do things using her mind, things that are incredible and sometimes incredibly dark. But as she resists the pull toward violence, a new survivor has entered her consciousness ? one without her will to block evil impulses. One who revels in bloodlust and seeks to expand his mastery by forcing the end of human society. And he’s coming for Amanda.”

This book is absolutely fantastic. I don’t think I could give it high enough praise than to say that the pedestal was reached Dr. O’Grady, you did it. I can only imagine that if this is his first novel, what is to come? And what happened to Amanda and the compulsively disturbed Dr. Phil, or the ex-detective Greg to whom carries the burdens of the world and his loved ones on his shoulders? Will there be others? Will Amanda ever find a balance within herself? This book had left me with more questions than I had when I began, but in a comforting way… a way that says it was enjoyed, consumed by a ravenous appetite for more words. And in the end only a silent ‘Thank You’ for bringing the genre back to life.

You can purchase Hybrid by Dr. Brian O’Grady for $11.24 on Amazon. You do not want to miss this book. Make room on your book shelf, your night stand, your coffee table or your Kindle… and get this book! It’s worth every penny spent and every second of your time.

I received samples for the purpose of reviewing. Opinions expressed are my own or my families and are not influenced by any form of compensation. Take it or leave it. Click here to view my full acknowledgment policy.