Welcome to our Step into Summer event! Jennifer and I have some wonderful things lined up for you to help you get ready for summer. Make sure you visit Jennifer at Eighty MPH Mom daily to see what she has in store for you too. Many days we will be reviewing and giving away the same item on both blogs – that is two chances for you to win!

“Perry Ellis (1940-1986) brought a new look to American sportswear. One of America’s most popular designers of the 1980s, Ellis made clothes that were relaxed and unpretentious, yet also sophisticated and timeless. Often described as an innovator, even as a maverick, Ellis once said, “I don’t make fashion. I make clothes.” His method, which has continued as his legacy, was to take traditional ideas and make them modern.

Over a quarter of a century after the launch of Perry Ellis, the designer name and legend still commands attention. Perry Ellis is one of the great American fashion brands.” 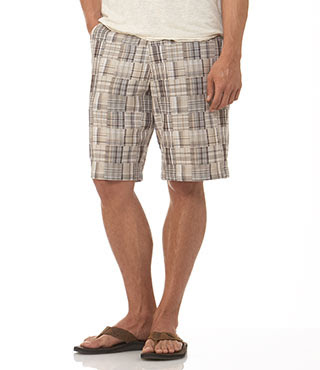 Perry Ellis sent a pair of the Patchwork Short for the Man to review. These shorts are 100% cotton and so nice and thin. They’re really airy and allow room to breathe in the summertime. I think they really look great on him too. 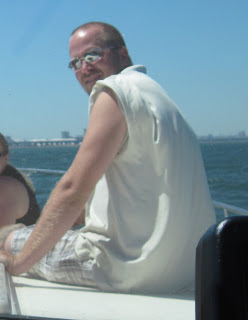 He thinks they’re very comfortable and actually wants more shorts like these. He actually wore them out on the boat a couple of weekends ago. It was a super hot day and he said he’s glad he wore those ones instead of a different pair. They kept him cooler than regular jean shorts and didn’t feel sticky on him.

They’re a bit longer than most shorts I see in this style too. That’s really great, because a lot of guys these days {including mine} don’t really like to show a lot of leg.

Perry Ellis offers quite a bit more than just men’s wear though. They have swimsuits for women as well as fragrances for him and her.