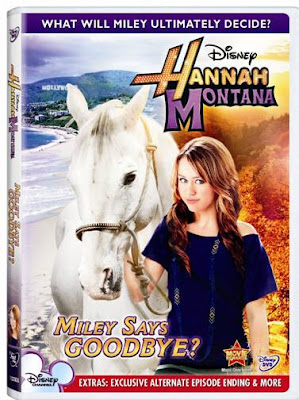 Never before has Miley Stewart faced such a crucial decision! Now, DVD viewers will be the FIRST to see the season finale with Miley’s pivotal decision-making moment about staying in Hollywood or returning home to Tennessee, only on DVD before it airs on Disney Channel! Get ready for Hannah Montana: Miley Says Goodbye?, with six episodes, including the Season 3 finale episode, exciting bonus features and a bonus episode.

? ?He Could Be The One? ? 1-hour episode with alternate ending Bonus Features
? Sister Secrets ? Miley’s real-life sister, Brandi, leads this exclusive backstage tour of the Hannah Montana show. Armed with her ?Brandi-Cam,? Brandi gets access and juicy details that only a real BFF can get with Miley, Emily, Jason, Mitchel, Moises, and even her dad, Billy Ray.
? Hannah Highlights ? Pop-up trivia/facts on the episode ?You Never Give Me My Money?

I do not have any daughters and my sister doesn’t live nearby anymore, but nonetheless I live in a household of Miley fans. We all {yes all of us} watch Hannah Montana. The boys watch it religiously. They love Hannah Montana! In fact Lil Man even has a crush on his uncle’s girlfriend who kind of resembles Miley!

Anyway, back to the show. Hey you know how I get sidetracked! Walt Disney Studios Home Entertainment will release Hannah Montana: Miley Says Goodbye on DVD March 9th. DVD viewers will be the FIRST to see the season finale in which Miley will decide her fate. She has a tough decision to make in this season finale. Will she stay in Hollywood or return home to Tennessee?

The kids and I had a bonding night if you will where we all cuddled up in my bed and watched Hannah Montana: Miley Says Goodbye. We watched quite a few of the episodes leading up to the finale and the kids just couldn’t keep their eyes open any longer. They zonked out and mom finished watching all by herself. Well, that is until I zonked out too!

The next day, I finished watching while they were in school because let’s face it, I just don’t have patience and I couldn’t wait! I had to find out. I had to know what she decided. I know you’re all probably wondering too, but I’m going to let you in on a little secret. My lips are sealed, and I’m not telling! Sorry, but I refuse to ruin it for you.

I will say though that the season finale episode, and all of the others on the DVD leading up to that episode, was fantastic! I was not disappointed one bit. Neither were the boys.