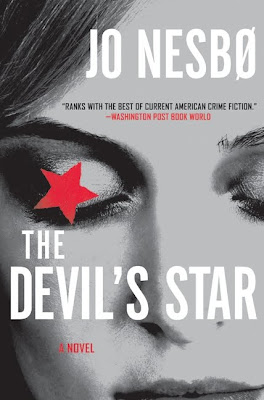 About The Devil’s Star:

?Astonishingly confident. . . . The Devil’s Star scores with an intriguing plot and Nesbo’s mastery of pace and tension.? ? The Times (London)

From one of the most celebrated crime writers in Europe and the award-winning author of The Redbreast comes an epic thriller featuring Police Detective Harry Hole. In the vein of the crime novels of James Patterson and Dennis Lehane, Jo Nesbo’s The Devil’s Star is an intricately plotted and suspenseful thrill-ride from beginning to end.

Oslo is sweltering in the summer heat when a young woman is murdered in her flat. One finger has been cut off and a tiny red diamond in the shape of a pentagram?a five-pointed star?is found under her eyelid. Detective Harry Hole is assigned the case with Tom Waaler, a colleague he neither likes nor trusts. He believes Tom is behind a gang of arms smugglers?and the murder of his partner. But Harry, an off-the-rails alcoholic, is barely holding on to his job and has little choice but to play nice.

Five days later, another woman is reported missing. When her severed finger is found adorned with a star-shaped red diamond ring, Harry fears a serial killer is on the loose. Determined to find the killer and expose the crooked Tom Waaler, Harry discovers the two investigations melding in unexpected ways. But pursuing the truth comes at a price, and soon Harry finds himself on the run and forced to make difficult decisions about a future he may not live to see.

One of the brightest stars of Scandinavian crime writing, Jo Nesb? has been compared to Ian Rankin, Michael Connelly, and Henning Mankell. His novels are bestsellers throughout Europe, acclaimed by critics and revered by aficionados of thrillers and mysteries. Brilliantly plotted and paced, The Devil’s Star shows Nesb? at his absolute best, combining powerful emotional resonance with truly stunning suspense.

It took me a little bit to totally get into The Devil’s Star. Not because it was a bad book, but because it has been translated and it was a bit hard for me to follow at first. Once I got the hang of Jo Nesbo’s writing style however, I was immediately hooked. I couldn’t seem to bring myself to put The Devil’s Star down. I had to keep reading to find out what would happen next.

The plot to this story was great, a series of murders and no one knew anything about who could have done it. Then there was finally some evidence and someone was arrested, but was this really who did it? I wondered myself throughout the entire book and really honestly thought I had it figured out. Boy was I wrong! The Devil’s Star was a suspenseful thriller until the very end complete with murder, smuggling, lies and corrupt police. I definitely recommend this title to all crime, murder, mystery and suspense fans everywhere!