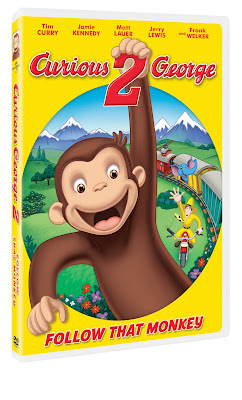 The world’s most beloved and inquisitive monkey is back in Curious George 2: Follow That Monkey, the fun-filled sequel to the hit animated movie. Join Curious George and The Man with the Yellow Hat as they set out on a madcap cross-country adventure to reunite Kayla, a homesick elephant, with her family. This unlikely trio faces all types of comic calamities and colorful characters and in the end, learn that with family, friends and determination, you can achieve anything. Featuring the voices of Tim Curry, Matt Lauer, Jamie Kennedy and Jerry Lewis, Curious George 2: Follow That Monkey, ?proves that family, friends ? and curiosity ? are number one.? (Francine Brokaw, Los Angeles Family Magazine)

* Two Never Before Seen Bonus Shows from the all-new TV season! See the premiere episode 6 months before it airs!
* Curious George’s Cross Country Caper Game ? It’s more fun than a barrel of you-know-what when George and Kayla go on the run with security specialist Marcus Wolfe hot on their trail! Exciting puzzles lead the way from New York to California so Kayla can visit her brother and sister. But be careful?a wrong answer could bring the Wolfe right to their door!
* Hold On, Here We Go ? Exclusive Music Video
* Coloring Pages and Wallpapers

I grew up with Curious George. In fact, I think I had almost every book. I always knew that mischievous little monkey has been around for a long time, but I never realized just how long. Did you know that Curious George was created in 1941 by Margret and H.A. Rey? I sure didn’t! That means he’s almost 70 years old, wow!

Curious George 2: Follow That Monkey was released on DVD today from Universal Studios Home Entertainment. We have been waiting for this release because lets face it, my whole family is a fan of Curious George. We just can’t resist that little monkey! His heart is always in the right place and that’s really what this movie is all about. They went to see Kayla perform and she disappeared in a magic trick, so of course “curious” George had to go see what happened.

I was given a screener DVD copy for the purpose of reviewing. Opinions expressed are my own or my families and are not influenced by any form of compensation. Take it or leave it. Click here to view my full acknowledgment policy.