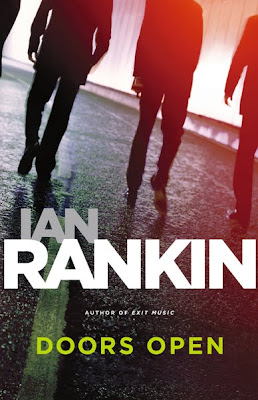 Three friends descend upon an art auction in search of some excitement. Mike Mackenzie-retired software mogul, bachelor and fine art enthusiast-wants something that money can’t buy. Fellow art-lover Allan Cruickshank is bored with his banking career and burdened by a painful divorce. And Robert Gissing, an art professor, is frustrated that so many paintings stay hidden in corporate boardrooms, safes and private apartments. After the auction-and a chance encounter with crime boss Chib Calloway-Robert and Allan suggest the “liberation” of several paintings from the National Gallery, hoping Mike will dissuade them. Instead, he hopes they are serious.

The last book I read before this was about art theft too. I found it interesting and enticing, wanting to know more. I knew that Doors Open would definitely have to be the next read on my list.

I have never read one of Ian Rankin’s books before. I found out what I have been missing when I read Doors Open. Ian writes in a way that I haven’t seen very often. He tells the story almost like you’re there. He successfully tangled your average every day guys with a crime boss and just made the story move and continue to go on.

and got completely caught up in the story. This was another of those page turners I just couldn’t put down. I stayed up half the night finishing it up.

I was given a sample for the purpose of reviewing. Opinions expressed are my own or my families and are not influenced by any form of compensation. Take it or leave it. Click here to view my full acknowledgment policy.

Previous Post: « Sam’s Club Membership / Gift Card
Next Post: Chicken Soup for the Soul: What I Learned from the Dog »