We’re a home hair cutting {at least for the males} kind of family. It’s not necessarily because of the economy or money. It’s pretty much because it’s easier. We’ve been doing home hair cuts since the boys’ very first cuts. The Man even does his at home.

Over the years, we have gone through a large number of hair clippers. They always end up breaking and the man has to try to fix them. 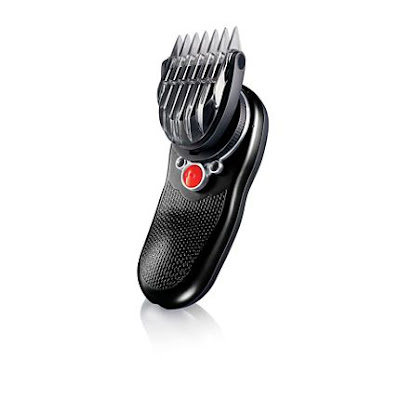 We were able to try that bad baby above, the Philips Norelco QC5170 180-Degree Hair Clipper. I was immediately impressed when I took it out of the box to check it out. For one, it’s cordless. BIG bonus! It can be quite a pain to maneuver around the boys {especially Lil Man} with a cord. Another major bonus, there aren’t a gazillion guards to try to keep track of. There are only two, and they are adjustable to all of the normal lengths like other hair clippers.

Now The Man noticed some other things like that you can fade the hair. He said “Tell them that thing is bad
butt”.

It cut everyone’s hair with such ease. My brother even used it to finally chop off his super long shoulder length hair. He just shaved right through it, didn’t even cut it first.

One thing that we really, really like about this as opposed to any other hair clippers we have ever owned, is that the cutting unit moves 180 degrees, so you can easily get around the ears. It’s also great for him, because he can use it himself and get all of those hard to reach areas. That’s great for me, since I used to always have to come in for those areas. Well, not anymore!

I was given a hair clipper for the purpose of reviewing. Opinions expressed are my own or my families and are not influenced by any form of compensation. Take it or leave it. Click here to view my full acknowledgment policy.