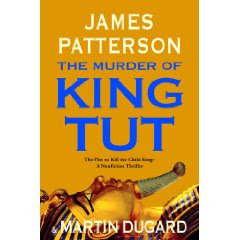 1922, when Howard Carter discovered Tut’s 3,000-year-old tomb, most Egyptologists have presumed that the young king died of disease, or perhaps an accident, such as a chariot fall.

But what if his fate was actually much more sinister?

Now, in THE MURDER OF TUT, James Patterson and Martin Dugard chronicle their epic quest to find out what happened to the boy-king. They comb through the evidence–X-rays, Carter’s files, forensic clues–and scavenge for overlooked data to piece together the details of his life and death. The result is a true crime tale of intrigue, betrayal, and usurpation that presents a compelling case that King Tut’s death was anything but natural.

I could not put this book down from the moment I opened it. The chapters are only 1-4 pages each, so it was so easy to just think “One more chapter and I’ll put it down.” I kept doing that last night even, until I finally finished the book and my sleepy eyes were finally able to close. This was an excellent read of corruption and betrayal. It is unreal what was thrown upon this boy at such a young age, and how even thousands of years ago people would kill to get what they want.

James talked about present time in this book and mentioned that his wife is from Wisconsin. I thought that was pretty cool. I wonder what city.

The Murder of King Tut: The Plot to Kill the Child King – A Nonfiction Thriller will be released on September 28th of this year and will be available for purchase at local and online retailers.