My son loves Transformers Rescue Bots! He refers to them as heroes.? Chase is his favorite Rescue Bot!? He even has?a Transformer Rescue Bot?and the two have been inseparable. 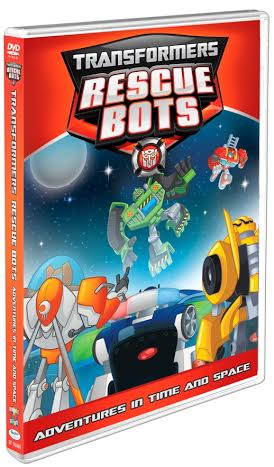 Griffin Rock’s Autobot first responders ? Chase, Heatwave, Blades and Boulder ? are back for five more action-packed adventures! Only this time, they?re proving that they?ll stop at nothing to protect their Earth friends, even if it means traveling through all of time and space!??The DVD?will be released on?February 23, 2016 from Shout! Factory Kids, in conjunction with Hasbro Studios.

Unfinished Business is my son’s favorite episode from Transformers Rescue Bots: Adventures in Time and Space DVD.? This?episode is Chasetellingthe story about his and Boulders experience with the Energon Vampire.? The Rescue Bots received a distress call from space.? They thought they were recuing people, but instead? a creature (Energon Vampire) was powering up the space craft to send out distress calls.?The space craft was?deserted of all humans.?They arrested the Energon Vampire for energon theft.

I thought the Switcheroo episode was quite funny myself.? Just image these enormous Transformer Rescue Bots’switching bodies?with a tiny person.? Unfortunately?Doc is having a hard time?figuring out how to correct the problem.? In the mean time the Rescue Bots are needed for a rescue mission, and are having a hard time?completing the task.

Each episode is about a recue mission preformed by the Transformer Rescue Bots to save their people.? Whether it is recuing them from a flood or outer space the Rescue Bots are ready for anything.

Previous Post: « Things to Know Before Remodeling Your Bathroom
Next Post: Turn Up the Heat with Grande Naturals Lash Products »