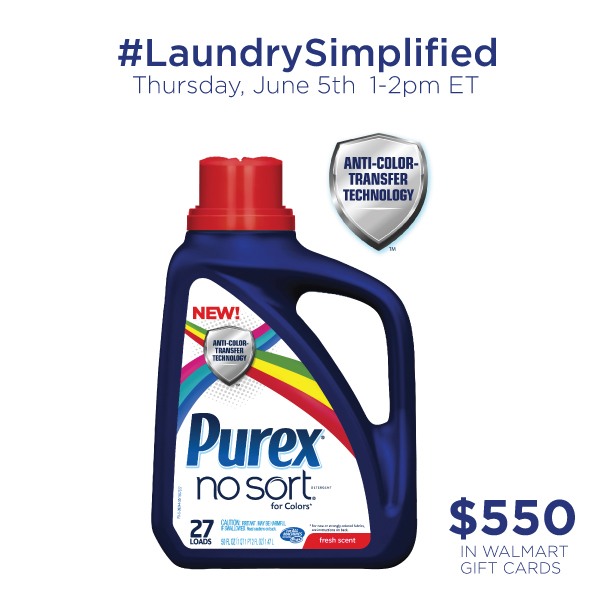 Do you love a good Twitter Party? You know we do and we're excited to host a party about saving time and money in your laundry routine. On June 5th at 1 PM EST, please join us for the #LaundrySimplified Twitter Party where we will be discussing how the rules have changed and give you the chance to win prizes!

With a house full of boys, laundry is always my biggest chore. No matter how many loads I get in a day, the piles never end. With Purex? No Sort?, my laundry battle should lighten a bit because I'll no longer have to sort thanks to the Anti-Color-Transfer Technology?! I also won't have to touch those boys' nasty clothes any longer, I can just dump the entire basket in! So if you want to learn how you can lighten your load {pun totally intended!} too, then be sure to join the #LaundrySimplified Twitter Party and learn all about this breakthrough technology!
Join me and RSVP for the #LaundrySimplified Twitter Party on SoFabChats!

How To Participate In A Twitter Party on SoFabChats!
TIP:  How to join a Twitter Party - sign in! Before party starts, click on the green ?Sign In On Twitter? bar at the top of the page!
TIP: Who to follow at a Twitter Party? Follow the Party Team by clicking on the Twitter handle links on the RSVP page!
TIP: Want to win Twitter Party prizes? RSVP by clicking on RSVP button before you join the party, follow everyone on the Party Team, and tweet with the party hashtag during the party to be eligible!
TIP: How to win the Early Bird prize? Watch for chance to share a tweet when you RSVP for chance to win!
TIP: Special deals and brand coupons? Keep that options checked when you RSVP for the party!
TIP: New to Twitter parties? Watch your column and Party Team tweet columns - they are slower paced and easier to follow!
TIP: Where to find Twitter Parties? Check out the SoFabChats Twitter Party Calendar to find more fun parties to attend!