You are here: Home / Blog / Pirates of the Caribbean: On Stranger Tides In Theatres May 20, 2011
“As an Amazon Associate, I earn from qualifying purchases.”
Tweet
Pin
Share
Share
0 Shares

"Produced by Jerry Bruckheimer and directed by Rob Marshall, ?Pirates of the Caribbean: On Stranger Tides? captures the fun, adventure and humor that ignited the hit franchise?this time in Disney Digital 3D?. Johnny Depp returns to his iconic role of Captain Jack Sparrow in an action-packed adventure. Crossing paths with the enigmatic Angelica (Pen?lope Cruz), he's not sure if it's love?or if she's a ruthless con artist who's using him to find the fabled Fountain of Youth. When she forces him aboard the ?Queen Anne's Revenge,? the ship of the legendary pirate Blackbeard (Ian McShane), Jack finds himself on an unexpected adventure in which he doesn?t know whom to fear more: Blackbeard or Angelica, with whom he shares a mysterious past. The international cast includes franchise vets Geoffrey Rush as the vengeful Captain Hector Barbossa and Kevin R. McNally as Captain Jack's longtime comrade Joshamee Gibbs, plus Sam Claflin as a stalwart missionary and Astrid Berg's-Frisbey as a mysterious mermaid."

I just love the Pirates of the Caribbean movies. Our whole family enjoys them and we own every one on DVD. When I found out I had the opportunity to go see an advanced screening of Pirates of the Caribbean: On Stranger Tides, I was ecstatic! I knew my kids would be disappointed because I only had two tickets, so I kept them in the dark about it and took The Man on a little "date night". 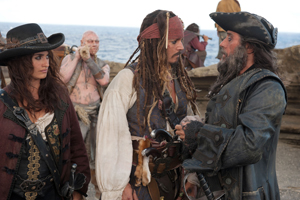 I loved Elizabeth in all the other Pirates of the Caribbean movies, so I was honestly disappointed when she wasn't in this one. However, Penelope Cruz did a great job as Angelica and the two of them {Angelica and Jack} seemed to just fit. Since Blackbeard is her father, she's a bit more like Jack than little goodie two shoes Elizabeth was. 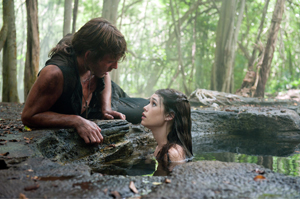 I also loved the mermaids and how they made them out to be these cold blooded killers. Except of course, the one who saved one of the ship men. It was kind of like a twisted love story in a way. I just adored Syrena.

Here are some fun facts about Pirates of the Caribbean: On Stranger Tides: 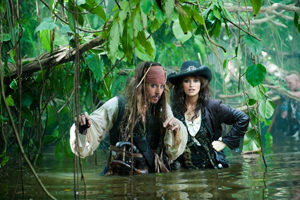 While Pirates of the Caribbean: On Stranger Tides wasn't my personal favorite of the Caribbean saga, it really was a great movie. I enjoyed it, enjoyed seeing Jack Sparrow again. I really liked him and Angelica together and would love for them to have something going on in the next one. Well that is, if there will be a next one!

I received tickets to see this movie. Opinions expressed are my own or my families and are not influenced by any form of compensation. Take it or leave it. Click here to view my full acknowledgment policy.