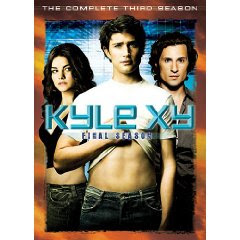 Action, mystery and suspense reach an all-new level in ten stunning original episodes of Kyle XY. Go to the next stage as Kyle (Matt Dallas) and Jessi (Jaimie Alexander) begin to work as a team and uncover the secrets of their origin. Kyle’s world is turned upside-down when his powers suddenly disappear, and he’s in for another surprise when Amanda (Kirsten Prout) comes home with an unexpected question. As one woman in Kyle’s life arrives, another must say goodbye ? though Jessi assures him they will always be connected. Meanwhile, the prom is fast approaching, and Kyle wants his night with Amanda to be perfect. After a dance neither of them will ever forget, Kyle comes face-to-face with the ultimate mystery. Experience every twist and
turn on three discs, including never-before-seen bonus features. You don?t know the whole story until you?ve seen Kyle XY: The Complete Third and Final Season.

Bonus Features
? Kyle XY: Future Revealed ? A look at what would have happened in Season 4
? Deleted Scenes
? Audio Commentaries

We have been watching a lot of movies and TV since The Man fell ill on Christmas. Thankfully we have quite the selection to choose from and we were able to try out Kyle XY: The Complete Third and Final Season. We started watching this series while my brothers were over one night. We all got completely into it. So into it, that I had to actually kick the boys out for the night since we were sleeping in the living room during The Man’s recovery. They were bummed of course, but soon got over it when they came over the next day to watch more.

We watched the Kyle XY series for 3 nights straight until it was finished. I totally fell in love with the characters and rooted for Kyle and Jessi to become more than friends. I was a little bit disappointed by the fact that the show was canceled so I’ll never be able to see more of the story. That show had a lot of potential in my opinion.

The Man liked the whole Science and suspense aspect of Kyle XY: The Complete Third and Final Season. He really enjoyed it, which he doesn’t get into many television shows. He too was a bit disappointed at the end though.

Besides the disappointment because we couldn’t see any more shows, ever… Kyle XY was a great series and I am glad to have been able to add Kyle XY: The Complete Third and Final Season to our video library.

Here’s a trailer. Check it out for yourself!

I was given a copy of Kyle XY: The Complete Third and Final Season for the purpose of reviewing. Opinions expressed are my own or my families and are not influenced by any form of compensation. Take it or leave it. Click here to view my full acknowledgment policy.