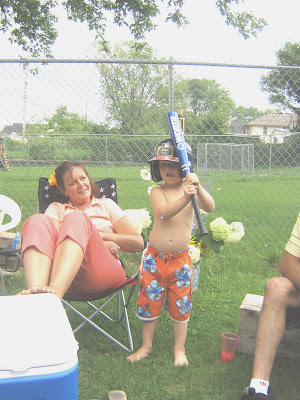 This picture is totally worth a thousand words1 It's a few years old, in fact it was taken almost 3 years ago in July of 2006. This is Lil Man and my mom at a Luau we had at the b/f's aunt's house. It's just so fitting that he's running around with a helmet on his head. i think he needs a permanent helmet along with knee and elbow pads. he's so clumsy, he falls and hurts himself all of the time! Did I ever tell you about when he got stitches and broke his arm? Well let me spill it here!

Last year at the end of August, he was running on the side of my mom's house, tripped over the hose and grabbed the basement window to try to break his fall. Well that didn't work so well because the glass was so thin, he put his little arm right through it. He cut it so bad, we had to rush him to the hospital. thank God we live about 15 blocks away from one, no need to call an ambulance. It was faster to just hurry to the hospital. He got stitches in his forearm and finger.

About a month later, he fell out of a tree and broke his arm. He was playing football with my brothers and the ball got stuck in a tree. They sent him up, and when he jumped down from the tree, he fell on his arm. He came walking in the house and said, very calmly I might add "Mom, my arm is bent". I took one look and ran next door to get my dad to take us to the hospital. He was very calm until he found out where we were going and he was terrified they were going to numb his arm again like they did for the stitches.

Ok, so that's all I'm telling for now. Next week will have to do with this post, so make sure you stop back to find out more. 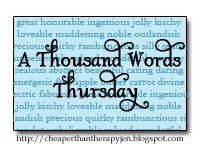 Visit Cheaper than Therapy for more A Thousand Words Thursday.