Our friends N & M stopped by last night, but called back shortly after they left to tell us there was a fire on their way home; that it was either the restaurant my mom worked at or The Fishing Hole right next door. After a few minutes we decided to go check it out for ourselves. We had to park blocks away because there were so many people that went to go see it. We got up there, and sure enough it was the restaurant my mom worked at. This fire was insane. There were fire trucks from every city around here, at least 15 - 20 fire trucks, and the same amount of cops. I swore the building next door, which makes those fried pork chips was going to end up in flames too. Just look at all that smoke, it was crazy. You could smell smoke as soon as we walked out of house that night to leave, and we live I'd say a mile or so from there.

It really sucks because now my mom is without a job. While she can easily go get a new one I'm sure, that one was so close and convenient. Not to mention, she was used to it. Now she's going to have to start all over again. Her and my dad just split up too, so I'm sure she's going to be hurting for money for a little bit until she can get back on her feet.

I don't know when they finally got the fire out, but we there there for a good hour and a half, maybe 2 hours and things were going so slow. This building is crammed between other buildings with no access from the back, so the only way in was from the front. They could only have 2-3 trucks on the fire at a time because there was no room. 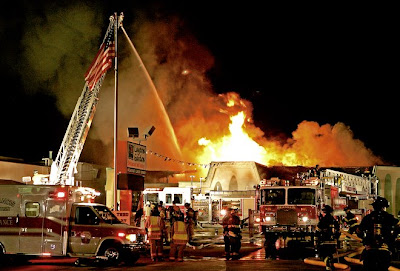 Here's some info I pulled off the JSOnline website. You can view the full story here.

Firefighters from about a dozen departments fought a fire that raged for hours at a landmark Cudahy restaurant Monday night, authorities said.

The fire at Layton Garden Restaurant and Lounge, 3107 E. Layton Ave., was reported about 8:40 p.m., according to Cudahy police. Flames were shooting out of the building more than two hours later.

No injuries were reported, but the structure appeared to be gutted.