When I was given the opportunity to review Crazy Dog Tshirts, I was ecstatic! They have tons of tshirts with cool sayings and pictures on them. The Non Hubby loves shirts with sayings and he loves video games. It wasn't very hard to pick one out for him.

The DON'T MAKE ME GO ZELDA ON YOU T-SHIRT was absolutely perfect for him! He loves that game. He was pretty excited when it came because he never gets cool mail lol. He likes the shirt too. In fact, it seems like it's never in the closet and I'm always washing it. 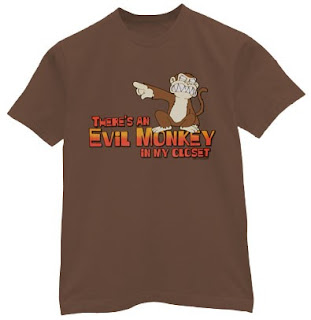 This shirt is pretty cool too. When my little Trixter was a toddler, he thought there was a monkey in his closet and refused to sleep in his room. I think he still has that fear, even though we are in a new house.

Crazy Dog Tshirts has some really cute Halloween Costumes too! I know it's far away, but it's never too early to plan for this year.

A special Thank You to Crazy Dog Tshirts for participating in this event!
I received samples for the purpose
of reviewing. Opinions expressed are my own, take it or leave it!
Tweet
Pin
Share
Share
0 Shares